I know, I’ve said it before.  And I’ll probably say it again, but this is one of my all time favs.

I’ve wanted to try using vintage wallpaper on a dresser for a while.  You’ll remember that I purchased some from my new friend Michelle at Junk Bonanza.  There it is, in the back on the right.  I also purchased the Annie Sloan Duck Egg paint at the same time.

All I needed was the perfect piece of furniture to use it on.

And I found it.  A lovely linen press dresser.

This was one of those pieces that was actually in decent shape to begin with, although it had some damage on one of the inside drawers.  I knew that the areas framed in with trim would be perfect for the wallpaper.

My process on this dresser in a nutshell was this.  I painted the entire thing with the Annie Sloan paint in Duck Egg.  Then, I used wallpaper paste to adhere the wallpaper.  It was slightly frail, and back in the day wallpaper was not pre-pasted.  I went back to my former wallpapering days and followed the same rules.  I ‘booked’ my wallpaper by spreading it with wallpaper paste and gently folding the piece in half, pasted sides together.  I waited a couple of minutes and then opened it back up and applied it to the dresser.  I smoothed out any bubbles and excess paste, trimmed around the edges with a razor blade, and cleaned off excess paste that had oozed out.  Once the wallpaper was dry, I waxed the painted portions of the dresser.  I did not wax the wallpaper.  I don’t think wax and vintage wallpaper would have mixed well.

What makes this dresser a linen press are the drawers inside that were intended for storing linens.

I added some label holders to the drawers.  They currently just have some of the vintage wallpaper in them, but one could change that to paper labels that show the contents of each drawer. 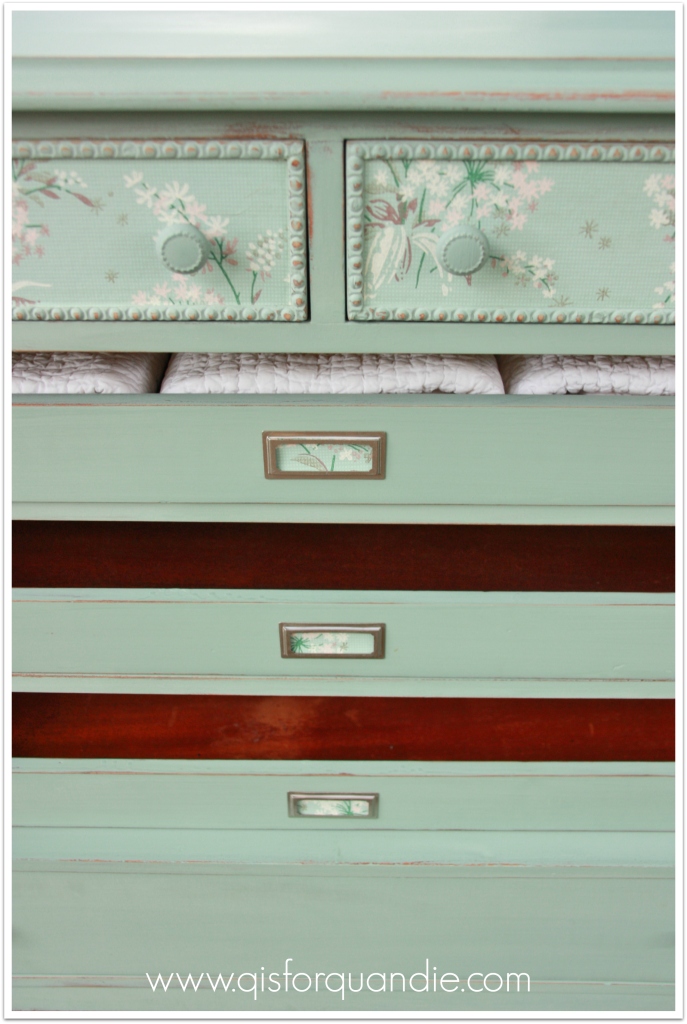 Imagine how pretty it would be to have all of your linens neatly stored inside this dresser. 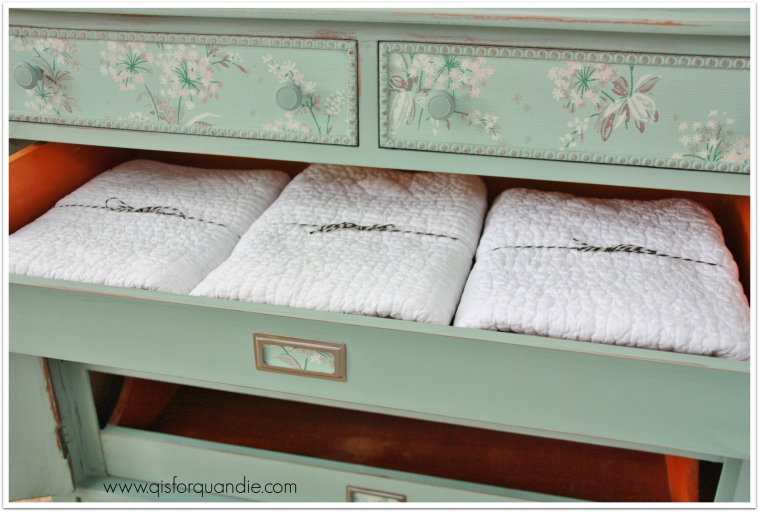 I staged the drawer with some white quilted Euro pillow shams that will be available at my sale.

I have to tell you, it was ridiculously windy when I was trying to take these pictures.  The doors kept blowing closed.  The lilac on top was fluttering madly.  Seeds kept falling out of the trees onto the top of the dresser.  It was pure madness I tell you!  You can see the movement in the lilac in this next photo. 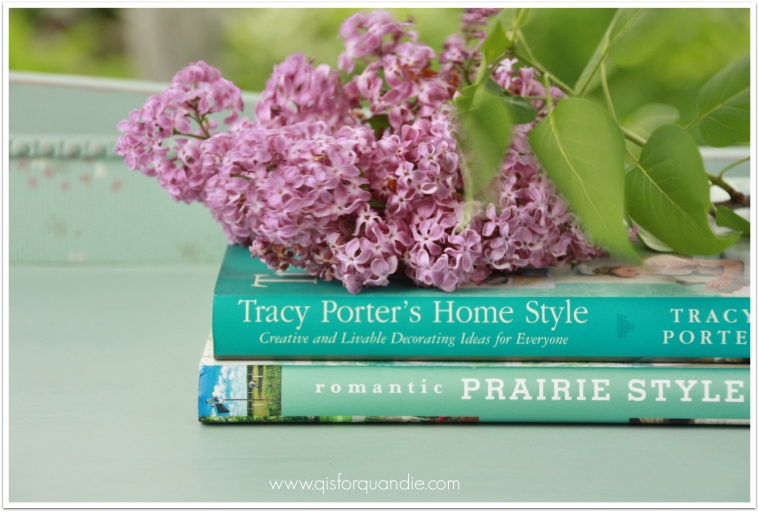 I once again painted the original knobs on this piece.  I had planned to change them out for glass knobs, but because of those interior drawers, I couldn’t have the screws on the glass knobs sticking out on the back side of the doors.  I could have cut the screws off, and counter-sunk the nuts, but that would have been quite a job.  I decided to just keep the originals instead.

Although you see casters on this dresser in the pictures, in the end I had to take them off.  They weren’t very sturdy, they kept falling out, and one broke off after the photo shoot!  Luckily I was able to repair the leg, but I wouldn’t recommend using casters on this piece.  In fact, I am learning to remove the casters from any older pieces that have slender legs like this one.  I love the look of the casters, but the reality is that they usually aren’t strong enough to handle rolling the dresser around on them.  And people are tempted to do just that if they are there.  I am warning all of you now, don’t roll your vintage dresser around on its antique casters.  You are inviting disaster.

So there it is, my vintage wallpapered linen press dresser.  This will be available at the Carriage House Sale! 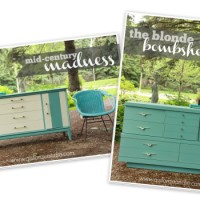