Although technically my furniture moratorium continues to be in place, I still bring in the occasional piece(s).  Especially when it’s an amazing bargain that is far too good to pass up.  So recently when I saw an ad on craigslist for a tall dresser that was exactly my style and about half the price I usually pay, I had to send Mr. Q for it.

But this post isn’t about that dresser, it’s about the second dresser that the seller had.  When Mr. Q got there the seller asked if we’d be interested in another piece she had for sale.  He texted me a photo, and I said “sure, why not?”  And thus, he came home with two pieces.

This low dresser was missing it’s hardware entirely.  I suspect the seller removed it at some point thinking she was going to refinish it, and then over time the hardware was misplaced.  It was priced accordingly though, so no complaints on that score.  I planned to just replace it.

Have I ever mentioned that my best ideas usually come to me in the shower?  Maybe because that’s the time when I’m really not concentrating on anything else.  My mind wanders while I’m shampooing.  So I was in the shower thinking about this cute little low dresser and I thought vintage wallpaper!  I haven’t done a wallpapered piece in a while, and looking back I’ve done quite a few of them over the years (here, here, here, here, here and here).

I happened to have a really pretty yard of wallpaper with daisies on hand (I usually order my vintage wallpaper by the yard via Etsy).  But before we get to the wallpaper, I first painted the shell of the dresser in Fusion’s Limestone.  I love the warmth of this white.  I sometimes forget how ridiculously easy it is to use Fusion paint.  I sanded the piece ever so quickly, wiped it down with TSP substitute and slapped on two coats of paint.  Then I distressed the edges a bit with fine sandpaper.  Done.

The wallpapering was a different story.  This was one of the more fragile pieces of wallpaper I’ve worked with.  I ripped it more than once.  Basically though, I measured a section of wallpaper to fit down the left half of both drawers, then a second piece to fit down the right half of both drawers.  I mixed up some wallpaper paste (I use the Zinsser Sure Grip powder so I can mix up just the small amount that I need) and smoothed it onto the back of each piece then gently folded them over to ‘book’ the paper.  I then drew a pencil line down the center of each drawer.  I lined up the wallpaper with the center line and worked my way out.  I kept the patterns lined up so that when the drawers are in place the pattern runs from one to the next, if that makes sense. 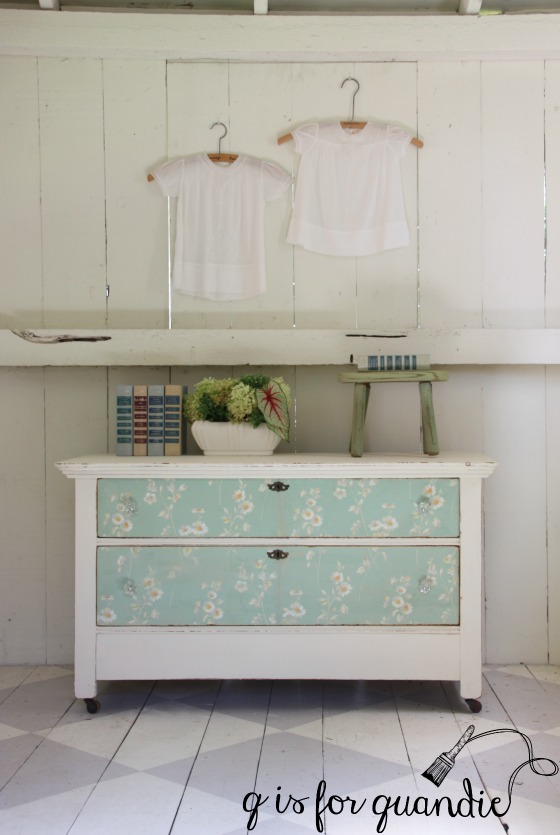 I made two mistakes with the wallpaper.  The first mistake was rubbing too hard while attempting to remove excess paste from the front with a damp rag.  Some of these vintage papers are not colorfast, and this is one of them.  I could see that I was starting to take the color off the paper.  Ooopsy daisy.

The second mistake was not allowing enough overlap in the middle of the drawers to cut off the edge of the paper.  The design did not go all the way to the edge on this paper.  There is about ¼” that was meant to be trimmed off.  Dang, oopsy daisy again!

I really felt like this piece needed to be up on casters.  It’s a low piece anyway, so the casters are like adding heels to just give it a little bit of a boost.  But boy, those things fought me every inch of the way.  The dresser obviously originally had casters.  Three out of the four original metal sockets were still in place and extremely rusted.  Although I had 4 vintage casters on hand, only one of them fit in the original sockets.  That meant I had to get those old rusted sockets out.  It took a bunch of elbow grease and there might have been a fair amount of cursing taking place, but I finally got them out and was able to fit the vintage casters with sockets in the existing holes.  Phew!

For such a simple piece, this one really gave me a run for my money.

I think this low dresser would be perfect for a TV stand.  It would place the TV at the perfect height for viewing.  Alternatively, it is also low enough to sit at the foot of a bed with some quilts stacked on top.

I’m still using the beautiful hand stitched baby dresses that I purchased from my friend Sue about two years ago for the occasional furniture photo shoot. 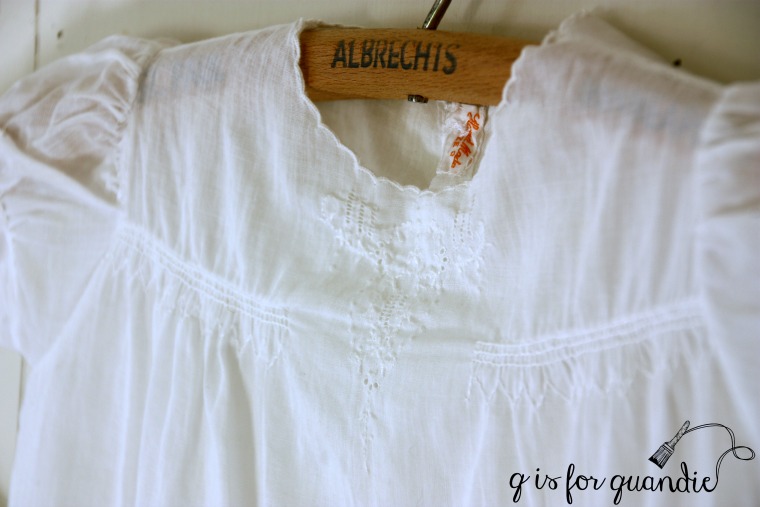 They are so lovely, but both Sue and I often ask ourselves what one would do with these other than hang them in a nursery?  Any ideas?

I always enjoy getting a glimpse of pieces inside the photo cottage after they are done.  They never stay in there for long though! 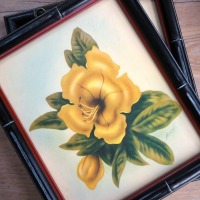 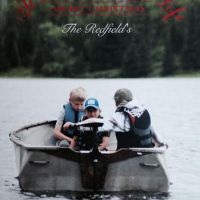 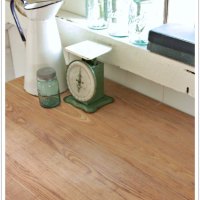