Hello everyone!  Just wanted to pop up a quick post to say that I’ve returned from Disney World exhausted, yet somehow also feeling renewed.  I gave myself a day of rest yesterday to recover from all of the crazy chaos that is a Disney park (if you can count a day of unpacking and doing laundry as a day of rest).  So rather than having a full on post about some sort of painting project today, I’m just going to share a couple of quick highlights from Disney.

My sister and I stayed at Port Orleans – French Quarter on Disney property.  I’m sorry to say that I didn’t really take any photos of French Quarter.  I wish I had taken a few more because it was really quite picturesque.

Full disclosure, the photo above actually shows Port Orleans – Riverside.  It is the next door neighbor to French Quarter.  There is a lovely walkway along the ‘river’ between the two areas, and we walked this pathway a couple of times during our stay.    I snapped that quick photo at dusk.

We had requested a room with a view of the river, and at night we often heard the horse drawn carriages clip clopping past on the path.

We absolutely loved this resort.  We’ve stayed at a few different Disney properties, and so far this is definitely my favorite.  It’s one of the smaller resorts on property and thus felt very quiet and uncrowded.  Considered how wildly crowded the parks themselves feel, it is nice to come home each night to peace and quiet at your hotel.

If you’ve been following me for long, you know that my sister and I (and sometimes my niece) go to Disney regularly, so I’m not going to bore you with all of the details of this trip.  However, I thought I’d share one of my favorite highlights which was a visit to Space 220.

Space 220 is the newest restaurant in Epcot that opened in 2021.  When dining at Space 220, you first board the space elevator that ascends 220 miles upwards to the Centauri Space Station. 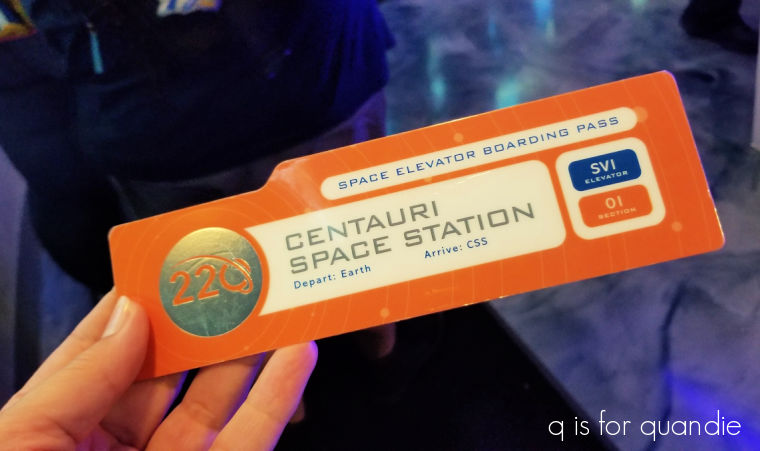 The illusion is amazingly realistic.  You’re given a ticket to board the ‘space elevator’ and from there you can watch through upper and lower porthole windows as you speed away from earth and towards the space station.

You can watch as Florida, and then the entire planet grows smaller and smaller beneath you.

Once you arrive on the space station, you are met by a host who leads you into the restaurant where you have the most amazing view of planet earth from high above it. 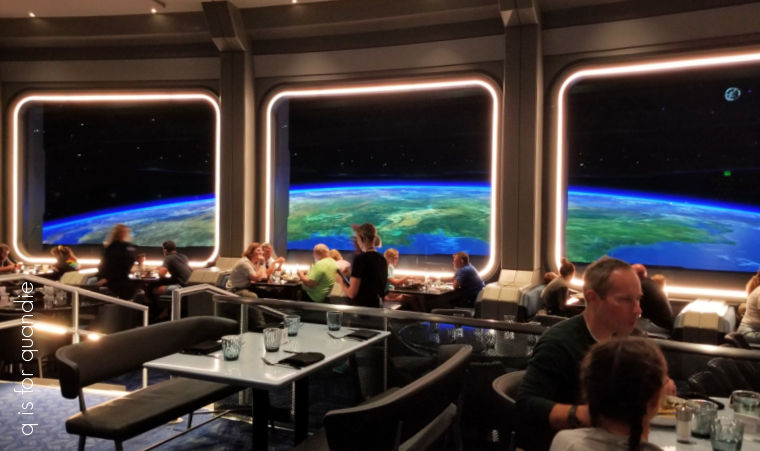 Throughout your stay, different objects appear in view such as space shuttles and astronauts moving equipment around and such.  I didn’t manage to catch any of that in a photo, but it was surprisingly realistic.

However, if you’re more budget conscious, you also have the option of visiting the lounge for drinks and appetizers.  If you really just want to experience the adventure of traveling to space, you could easily get away with spending less than $20 if you just get a drink.

My sister and I opted for drinks and a couple of shared appetizers.  The drink we both ordered was called the Atmospritz and was made with New Amsterdam vodka, Aperol, Blood Orange, Orange Juice, Prosecco, and a Cotton Candy Cloud.  It also came with a bit of a flourish as our waiter poured them after he brought them to our table.

You guys, for a drink made with cotton candy, these were crazy strong.  My sister is a bit of a light weight, so it wasn’t surprising that she was feeling loopy after just a few sips, but even I couldn’t finish the entire drink.  Not without needing to take a nap under the table anyway.  But they were certainly fun to try.

For appetizers we went with a classic shrimp cocktail and chicken on a waffle.

Both were really delicious.  I’m super picky about my shrimp cocktail.  The shrimp has to be perfectly fresh, not fishy smelling or rubbery.  These were fabulous.  Totally my favorite thing on the table.  My only complaint is that we paid a whopping $24 for just 4 shrimp.  However, they were U 10 shrimp, in other words, quite large.  My sister preferred the chicken on a waffle, and that was quite delicious as well.  It was fried chicken with some smoked bacon on a roasted corn waffle with a spiced coleslaw and a bourbon maple glaze, and it was $18.

Although we weren’t stuffed or anything, the dessert menu didn’t really offer anything that tempted us.  So after finishing our drinks and apps, we took the space elevator back down to earth and headed off to Norway to go on the Frozen boat ride.

As usual, we had a great time at Disney World despite some pretty massive crowds and a bit of heat and humidity.  But it’s great to be back home again.  We came back to sunny skies and temps in the 60’s, so I’m going to have to work a little to get back into the holiday spirit, but I’ll definitely have some Christmas painting projects to share with you later in the week so be sure to stay tuned for that.

In the meantime, have any of you dined at Space 220?  Or maybe you have another favorite Disney restaurant that you want to recommend.  If so, be sure to leave a comment!

2 thoughts on “drinks in space.” 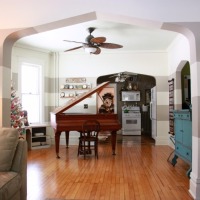