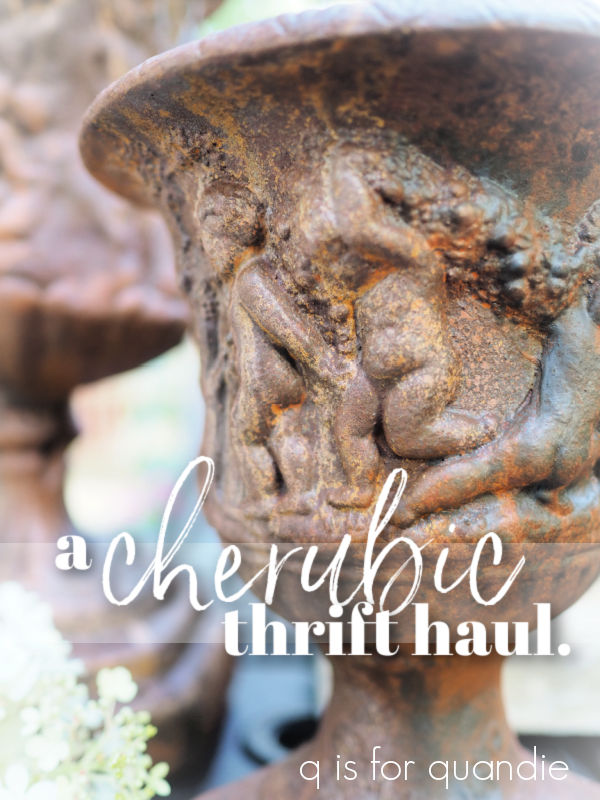 For those of you who also frequent garage sales or thrift stores, let me ask you this; do you often find that sometimes a theme seems to emerge on any given day?

For example, there was the time I came home from a neighborhood garage sale with a jumble of chairs. 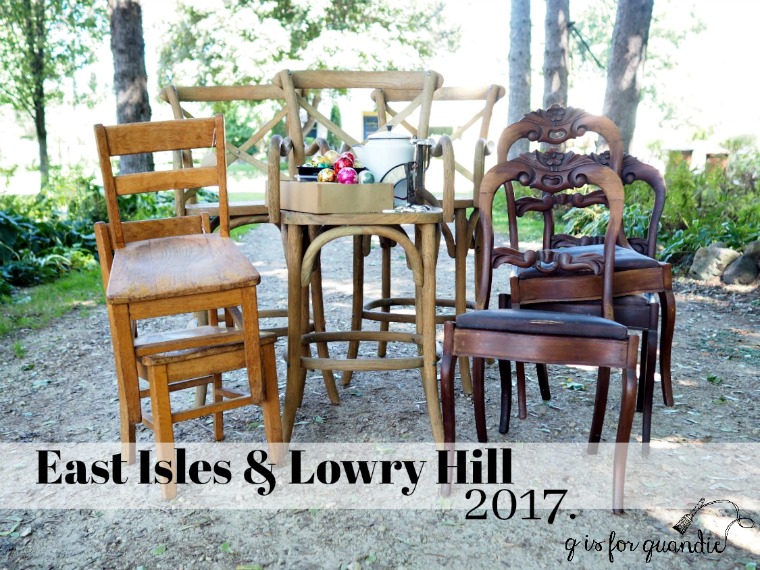 I once decided that a grouping of chairs should be called a ‘jumble’, sort of like a school of fish or a murder of crows.

And then earlier this summer I found tons of toolboxes one day. 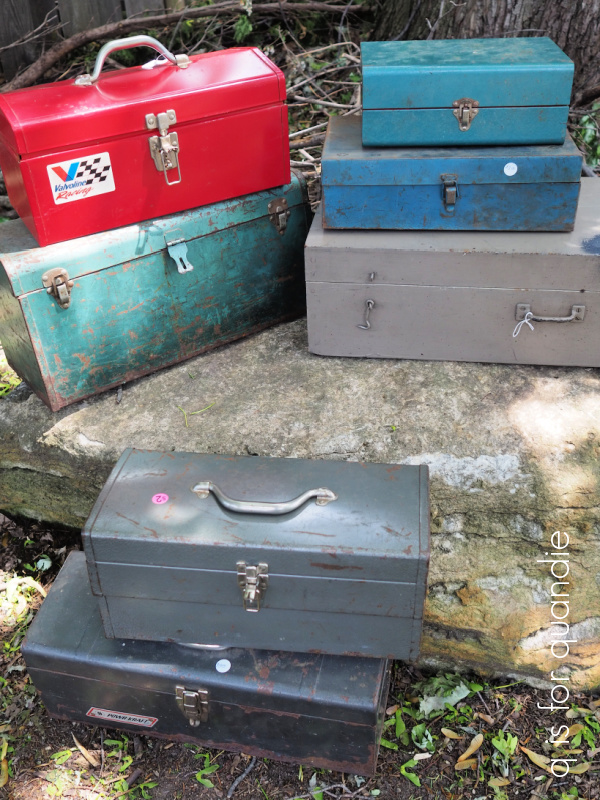 I wasn’t particularly looking for chairs or toolboxes on those occasions, but there they were.

Well, a couple of weeks ago when my friend Sue and I went thrifting another theme seemed to emerge. 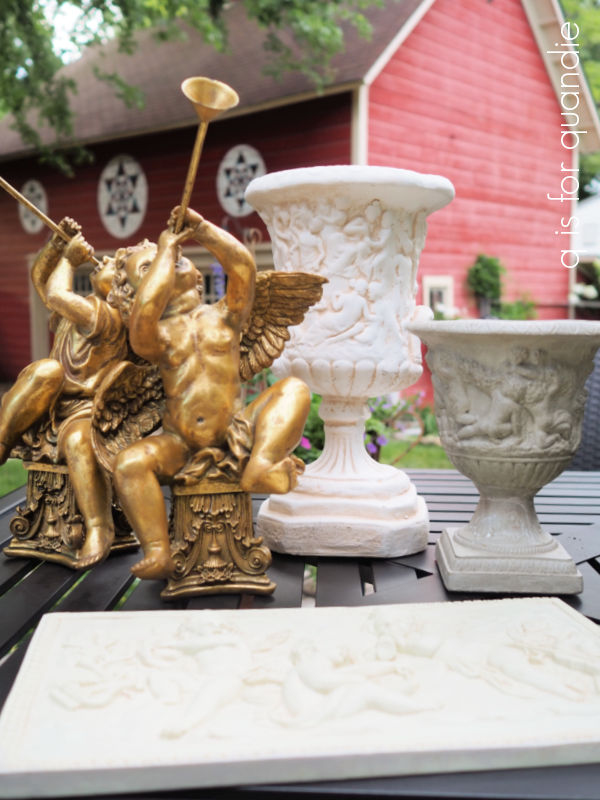 First it was the tall urn that I found at Goodwill.

Well, OK, probably best not to look too closely at what’s happening on that urn, I don’t think those are cherubs after all.

However, I also found a plaque at Goodwill that definitely has cherubs.

The shorter urn was from Turnstyle, and also definitely cherubic. 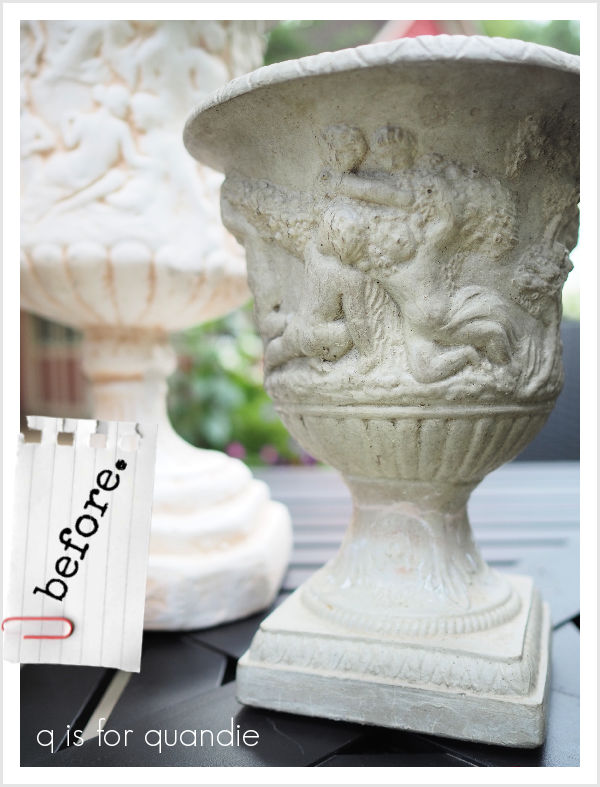 And finally we have the golden cherubs, and they were also from Turnstyle.

I have an embarrassing confession to make regarding these.  I paid $14 each for them at Turnstyle, and when I got them home and was cleaning them up, I turned them over to find the original Marshall’s tag for $12.99 each.

I’m fairly sure I’m going to lose my status as an expert thrifter for that one … not that I have ever claimed to be an expert.  Clearly I’m not.

You’d think I learned my lesson from the last time I purchased an item at Goodwill that still had a Marshall’s tag on it.  That time the clerk at Goodwill charged me the Marshall’s price, which was quite a bit higher than the Goodwill price.  And I didn’t notice that one until I’d gotten home either.

But I don’t really feel too bad about it, they have turned out pretty cool as you’ll see in a minute and were worth every penny of that $28.

I had one thing in mind when purchasing all of these cherubic pieces, rust!

(if only I’d gotten the shirt!)

So I cleaned them all and then gave them a coat of flat red primer spray paint.

I could have used the Dixie Belle Prime Start, but that has to be brushed on and with all of the nooks and crannies in these piece, spray was just easier.

Next I pulled out the Dixie Belle Iron patina paint and gave them all two coats.  Yes, the Iron paint does get brushed on, but I recommend stippling it on with dabbing motions to avoid getting any brushstrokes which will become more obvious as the green spray will settle in those.  In addition, I find that you don’t have to be too particular regarding coverage with this technique.  Any spots missed with the Iron paint will barely be noticeable with that primer red base color, or they can be easily touched up.  While the 2nd coat was still wet, I sprayed everything with the green spray to create rust.

After waiting a day or so for the rust to fully materialize, I realized that I’d missed a few spots on the undersides of several of the pieces.  So I flipped them all over and dabbed more Iron paint on those areas and sprayed again.

After another day I still felt like there wasn’t enough rust for my taste, so I tried a little experiment with the two urns.  I’d noticed that the rusty pieces I’ve placed in my garden tend to get more rusty after they get a little rain.  So I decided to use my Dixie Belle Continuous Mister Bottle to spray them with a fine mist of water.

That totally did the trick.

When I’m leaving my rusty pieces outside, I typically don’t seal them.  I have several planters, and some iron garden furniture, that I’ve used the patina paint on and then left outside … even in the winter … and they hold up just fine, although of course they do continue to get rustier over time.

However, in this case I was bringing these into the shop and I didn’t want them to damage other items they might come into contact with so I gave them a couple of coats of Rust-oleum Matte Clear coat.

I find that the matte finish of this spray clear coat doesn’t alter the texture of the rusty patina quite as much as a glossier finish, although it does still change it a little.

So here is how those urns turned out.

And here is the plaque …

As for the golden cherubs, I think they would be perfect for Christmas décor, but the gold was a little too precious for me.  Now that I’ve made them rusty, they have an earthier feel.

I can see these added to a Christmas planter outside, but they could be used inside as well.  Maybe as part of a table-scape.

So tell me, which do you prefer?  Rusty or golden?

I’ll probably hang onto these cherubs until the Christmas season, unless one of you locals want to snatch them up now.  If so, check out my ‘available for local sale‘ page for more details.

You’ve probably noticed that I only had small projects to share with you this week.  Well, that’s because I’ve been hard at work behind the scenes painting the potting shed.  Phew!  I forgot how much work such things can be, and this one required A LOT of prep.  Luckily my friend Annie came over to help me, which motivated me to get ‘er done.  I’m hoping to share the completed shed next week, so be sure to stay tuned!

18 thoughts on “a cherubic thrift haul.” 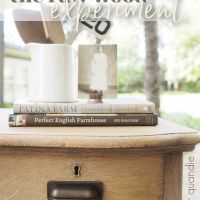