This past Friday was just simply too gorgeous of a day to go to work.  So my sister and I played hooky.  We hopped into my convertible VW Bug and headed for the other side of the Twin Cities. 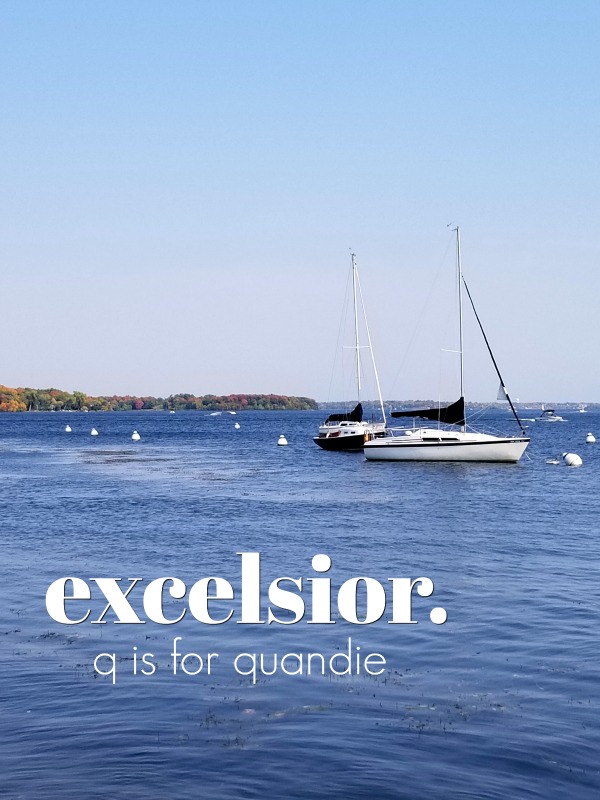 Excelsior is an adorable little town on the south side of Lake Minnetonka.

Our first stop was actually the last stop on the walking tour, Palmer’s Grove.

According to the walking tour map, this spot held summer rental cottages until at least 2000.  We’re guessing that the one shown above is the only original cottage remaining.  Isn’t it adorable?  How amazing would it be to spend a summer vacation there?  From now on I think this will be how my imaginary lakefront cabin looks on the outside.  You know, the one I would have if I had a lot of extra money.

The Excelsior Public School was built in 1899 and it’s certainly an imposing structure.

It was used as a school until the 1960’s, but now serves as an office building.

Our last stop on the tour turned out to be my favorite of the historic homes.  The Victorian style Wyer/Pearce house was built in 1885.

Originally the property went all the way to the lake and I imagine there was grand lawn that was perfect for playing croquet.  The space has been built up since then though, so we could no longer see the lake from where we were standing when I took that photo.  But maybe you can still see it from some of those upper story windows.

Before heading out of town, we popped into a few shops along Water Street and I just have to share this one with you guys.  It’s called The Country Look in Antiques. 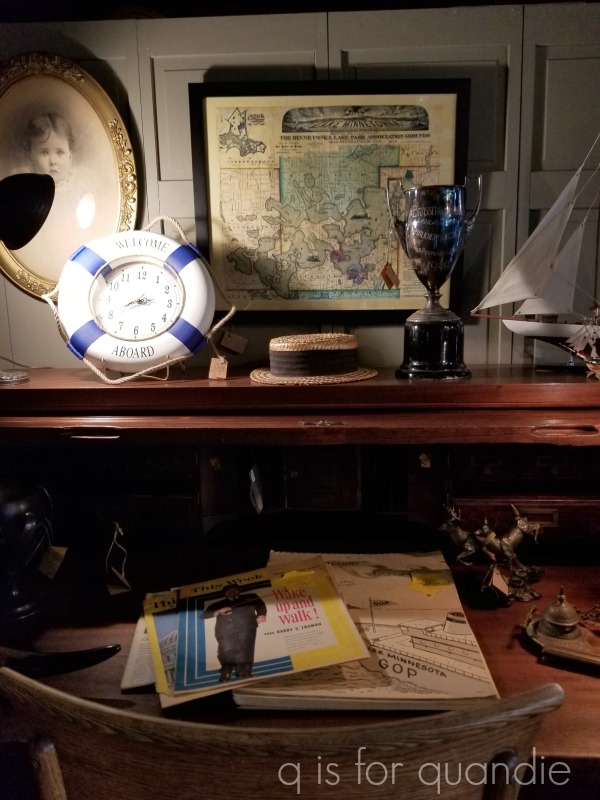 I’ll confess, I don’t do a lot of shopping in antique stores.  Usually their prices are too high for me, and I don’t enjoy digging through mounds of stuff looking for the one or two gems as much as some people.  But this shop was styled beautifully.

The items for sale were expertly curated.  Every piece would look fantastic in my imaginary cabin, right down to the vintage croquet mallets. 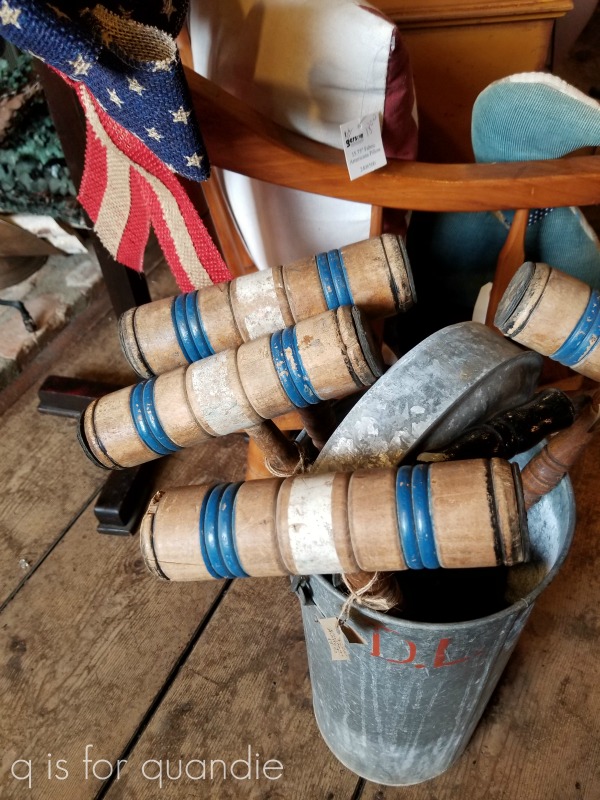 I might have to pass on the buffalo head though.

In hindsight, I wish I had at least looked at the price tag on this set of Mark Twain books.  I think Mr. Q would have enjoyed having it.

And I just love the look of them!

But I was distracted by the item that I did buy … 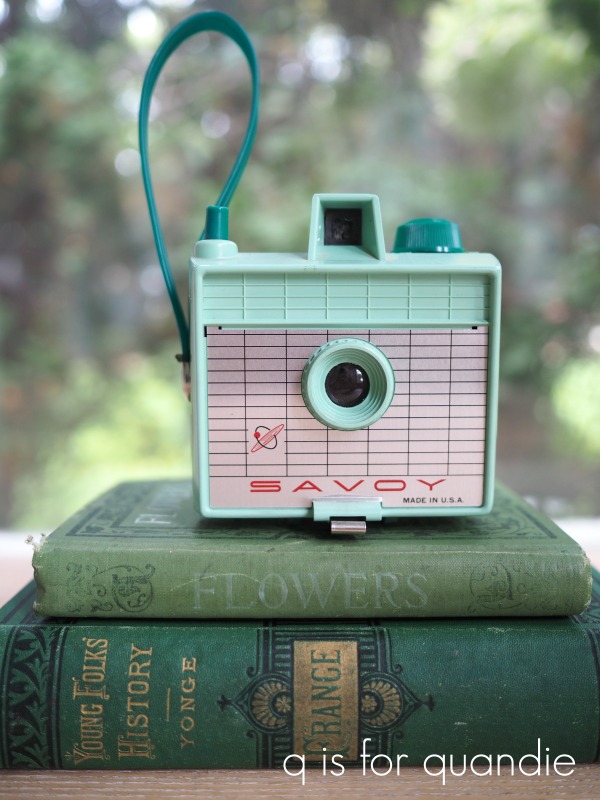 I’ve seen these fabulous mint green Savoy cameras on pinterest, but I’ve never seen one for sale.  I paid $30 for it, and looking around online I think that was a more than fair price.  There are a few of them for sale on Etsy ranging from $40 to $60.

My sister purchased a 1970’s Life magazine with the opening of the Magic Kingdom in Disney World on the cover.

So we each came away from Excelsior with a suitable souvenir.

We headed off to a 2nd destination after shopping on Water Street, but I’m going to save that story for another day.  But how about you, did you visit any quaint little towns this past weekend? 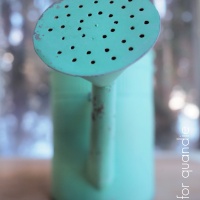 I snazzed up this tiny dresser with some paint and some transfers. Check out my blog to see all of the details.
I gave this wooden bucket an aged finish with @homesteadhouse milk paint in Soldier Blue. Such a gorgeous color!
Today on the blog I'm sharing some simple stenciled dish towels. It was a fun crafty project for a winter afternoon.
Today on my blog I'm sharing the transformation of this gorgeous antique bed using some @dixiebellepaint and a transfer from @ironorchid_design
Today on the blog I'm sharing some thrift store makeovers including this barn wood box given a new life with the help of a @wallcutz stencil and some @dixiebellepaint
Check out the makeover of this ReStore find on my blog today! Painted in @dixiebellepaint in Drop Cloth.
I turned some more cast off cupboard doors from the Habitat for Humanity ReStore into signs with some @dixiebellepaint and a stencil from @wallcutz
Happy New Year! Here are a few of my favorites from 2020!
Trying something a little different today, stenciled design on a wood finish. Check it out on the blog.
Today on the blog I'm sharing this primative cabinet that got a little makeover using @dixiebellepaint in Sawmill Gravy and an old @ironorchid_design transfer. Be sure to check it out.
Today on my blog I shared how to make do with homemade gift wrap. I used some fab stamps from @ironorchid_design.and some plain brown craft paper. Check out all of the details on my blog (link in profile).
Had some fun creating signs out of old cupboard doors using @dixiebellepaint and some stencils from @maisondestencils.
Loading Comments...
Comment
×
<span>%d</span> bloggers like this: