It becomes more and more apparent as I write this blog year after year that I am definitely a creature of habit.  And it seems as though one habit I can’t break is bringing home larger pieces of furniture, and then procrastinating on finishing them until winter is looming and I have to get them out of the carriage house.

Last year it was the Cabinet of Curiosities, this year it’s this large cabinet …

This piece was afflicted by a series of delays, mostly because I couldn’t make up my mind on how to paint it, but there was a bit of procrastination involved as well.

Let’s start at the beginning, shall we?

One of my favorite customers alerted me to this cupboard because it was sitting at the curb with a ‘free’ sign on it in her neighborhood.  I sent Mr. Q to snatch it up, but he returned empty handed.  It was too big to fit in our Ford Transit van (delay no 1).  But my neighbor/handyman Ken offered to hitch up his trailer and go back with him to get it.

I neglected to get a true ‘before’ photo of the inside once they got it home, but originally this piece had a very heavy mirrored back.  That made absolutely no sense to me since you really could only see the lower half of your body in the mirror, and then only if the cupboard was empty.

So, the mirror came off right away to be replaced by some faux bead board paneling.  Unfortunately, 4′ x 8′ sheets of paneling also don’t fit in our Ford Transit van.  No problem, normally I would have one cut in half at the store and a half piece would be sufficient for the back.  However, Home Depot wasn’t doing custom cuts during the initial COVID shut down (delay no 2).

Luckily I have some connections.  My sister works at Home Depot.  Just not the Home Depot near me.  So we made arrangements to meet her at her store where she was able to finagle someone to cut the paneling for me.

Next up was coming up with a solution for the shelving.  Again, I don’t have a proper ‘before’ photo to show this, but the cupboard came with metal shelf brackets and shelves that were made out of cut down cheap hollow core doors.  Hmmmm.  Can you say tacky?  That stuff all went into the trash.

Instead Ken made new shelves similar to the ones he made for my giant English cupboard.

Ken also did some patching on the top of the cupboard where some notches had been cut out, I assume to make it fit around trim or something as a built-in.

I used Dixie Belle Mud to fill the seams, and now you can barely see them …

Next up was painting the interior of the cupboard.  After giving it a bit of thought, I decided I really wanted to repeat the color combo I used on the vintage medicine cabinet I did earlier this summer, which meant using Dixie Belle’s Gravel Road on the inside.  However, I didn’t have enough Gravel Road on hand to complete the job so I had to place an order (delay no 3).

I love this dark color for showing off some ironstone.  But of course, the doors are not glass so this cabinet isn’t meant for display.  Instead it’s meant for storage, and you could fit quite a lot of stuff inside!

The next step was painting the outside.  I thought this would be the quickest step, and it really should have been.  I mixed up the same Sweet Pickins milk paint that I used on that medicine cabinet, Window Pane.  I started to paint and quickly realized that my milk paint was too clumpy to use and no amount of mixing was dissolving the clumps.  So I had to get out a strainer and strain the paint in order to use it.  FYI, to do that I just use a handheld metal mesh strainer like this one … 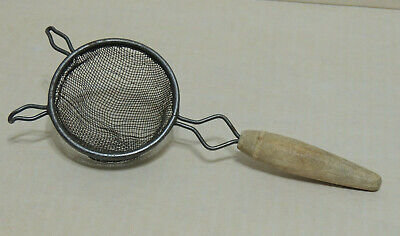 I’m sure I purchased it at a garage sale for a quarter or something like that.  I use it just for paint.

So I persevered and painted on the first coat.  I know from experience that the first coat of milk paint always looks bad, so even though I wasn’t loving the way it looked so far I kept going and added a second coat to the top of the cupboard.  And you know what?  I still didn’t like it.

At that point I was out of mixed paint and would would need to mix and strain some more to keep going.  Instead, I decided that milk paint just wasn’t going to be worth it this time.  So I cut my losses and switched to Dixie Belle’s Sawmill Gravy.

As soon as I started painting again, I knew I’d been wise to make the switch.  The color of the Sawmill Gravy is just a tad warmer than the Window Pane, and it was covering beautifully.

Two quick coats later and the painting was done.

For the final touch I decided to use the IOD Label Ephemera transfer on the doors, but naturally I did not have it on hand.  So I ordered two of them online from Jami Ray Vintage (delay no 4).

I’m sure you are wondering why I didn’t just get everything I needed all at once in the beginning, but sometimes my ideas evolve slowly over time. Originally I was planning to use a re.design with prima transfer on this piece, but in the end I just had to have the IOD one instead.

To clarify, here is what the entire Label Ephemera transfer looks like.

I’m using just parts of it on this cupboard.

My biggest complaint about this transfer is that they overlapped a bunch of the elements rendering sections somewhat unusable on their own, which drives me a bit mad.  I think they meant this transfer to be used as one big design, but as you’ve seen, I like to break it up and use the elements separately.

Since this cupboard has two symmetrical doors, I really debated whether to make them the same or put different sections of the transfer on each door.

I just couldn’t break out of my symmetrical shell though, so I made both doors the same (which meant ordering two of the same transfer).

Lucky the cupboard was free at the curb, because these transfers were $25.50 each (on sale) plus shipping.  I ordered a few more things to make the shipping cost a little more palatable, but it still adds up.

But I’ll get quite a few more projects out of the rest of each transfer as well.

You may have noticed that I painted over the hardware on this piece.

Not so much because I didn’t like them ‘as is’, but more so because I wanted them to not stand out quite so much.  This way they blend in a bit, but still have a lot of character.

So finally, after several months of stopping and starting, this cupboard is finally finished.

This is one of those times when I would really love to keep this one for myself, but the only way I could find a spot for it would be to get rid of something else.  I debated getting rid of the Belgian bed bench next to my back door, but we sit on that to put our shoes on so I think we’d miss it.  I also considered replacing my Specimens cupboard with this piece, but I really love that one too.  Plus it’s on wheels so that I can easily move it and use that spot for furniture photo shoots.  This piece is a little too heavy for that.  I’d replace my Rooster cupboard with this one, except this one is a tad too wide for that spot.  Ditto for the botanical cupboard on my front porch.

So this piece is for sale to a local shopper who can pick it up.  Be sure to check out my ‘available for local sale‘ page for more details.

Thanks to Dixie Belle for providing the Mud, Sawmill Gravy, Gravel Road and Flat clear coat used on this project.

18 thoughts on “the herbier cabinet.”