I veered off track a bit with my Wednesday travel post last week and skipped ahead to the end of our Adriatic cruise, but now I’m back on track and today I’m sharing what we did during the first half of the day while our ship was docked in Monaco. 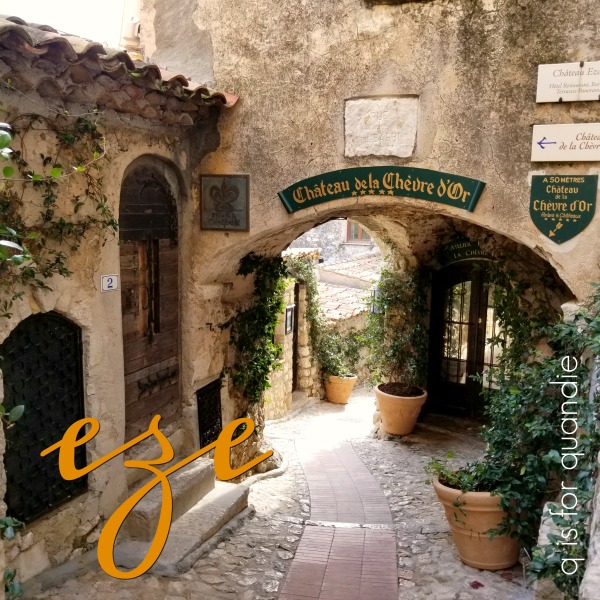 We took a ship sponsored shore excursion to Eze, France.

Eze is a small medieval hilltop village just across the border from Monaco.  It probably took us less than 30 minutes to get there, so it’s not far.  I’m not really sure of the exact timing because our very charming tour guide kept us entertained the entire way sharing interesting tidbits about both Monaco and Eze.

Once again I’m wishing I had a drone so that I could show you the amazing location of this pretty little village using my own photo.  Coincidentally, I was just reading the December 2018 issue of Martha Stewart magazine and guess what?  Martha has a drone.  She uses it to take photos of the sweeping vistas of her own property.  I don’t really think I need one for that, but it sure would be fun to have one for travel.  In the article she claims that drones are ‘more accessible and affordable’ these days.

Regardless, I doubt I’ll get a drone anytime soon.  Plus, I suspect Martha’s definition of ‘affordable’ is slightly different than mine.

In the meantime I’ll borrow this next photo from the web just so you get a feel for the location of Eze, which is perched at the top of a hill overlooking the sea.  You can see the church in about the center of the photo, and above it just a little to the right at the very top is the exotic garden.

Eze has been on my bucket list since the last time we went to Monaco, which was about 10 years ago.  That time we didn’t make it to Eze and I really regretted it.  So when I realized this cruise made a stop in Monaco I knew I had to get there this time.

The only downside to Eze is that it tends to be terribly touristy.  I always say that the reason why places become touristy is because they have something fantastic to offer.  People start talking about the place because it’s uniquely charming, or interesting, or historically significant and then word gets out and everyone wants to go there.  Suddenly the place is overrun with tourists. 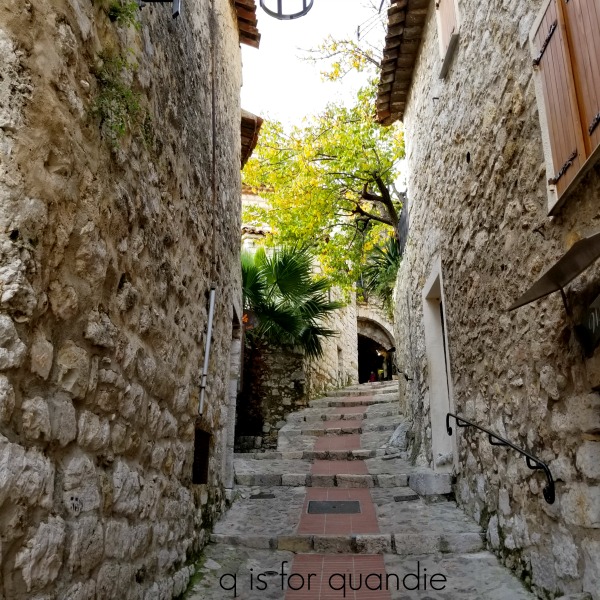 But here’s the trick to visiting really touristy places, go in the off-season.  These captivating little alleyways can be thronged with people in the summer, but they were practically empty while we were there.

We stopped for a cup of coffee at this lovely cafe and were literally the only people in the place.

Granted, probably at least half of the shops were closed.  But that doesn’t matter one bit to me, I’m not a shopper when I travel.  I’d much rather spend my time running around taking photos rather than shopping. 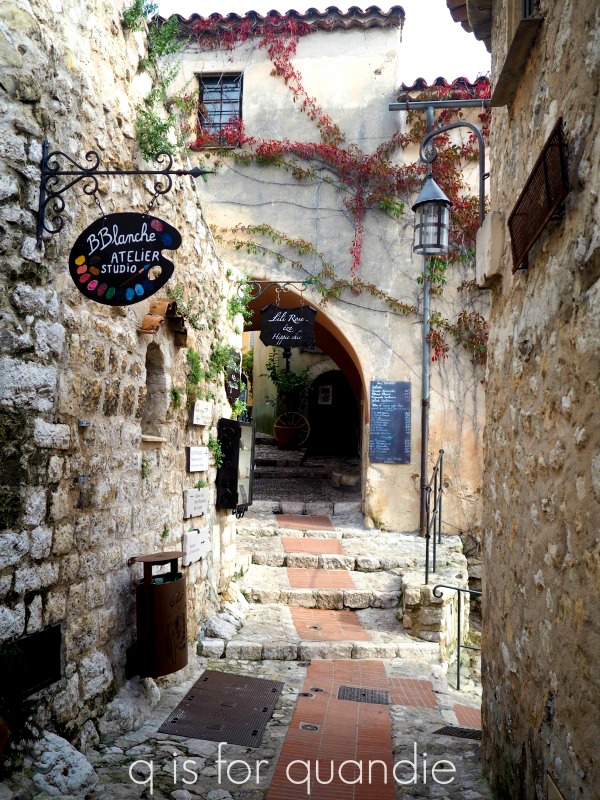 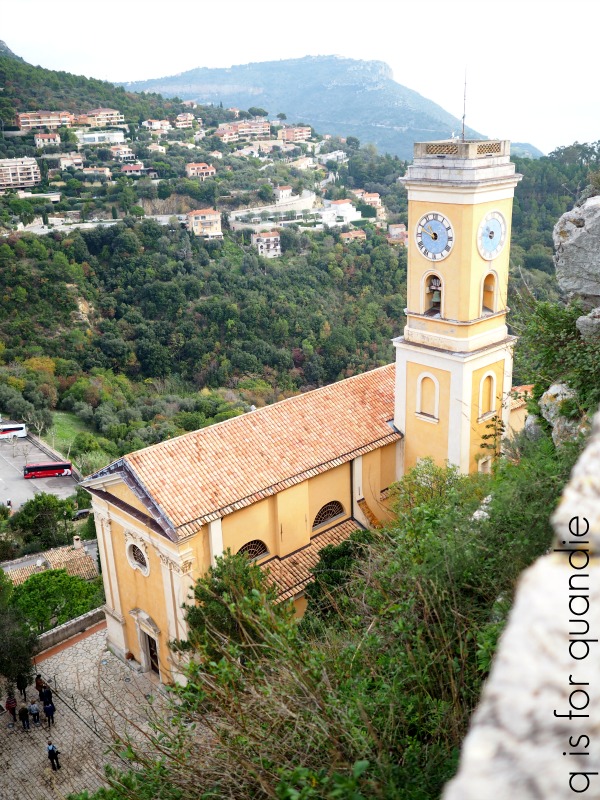 This church was built between 1764 and 1778 on the ruins of an original 12th century church. 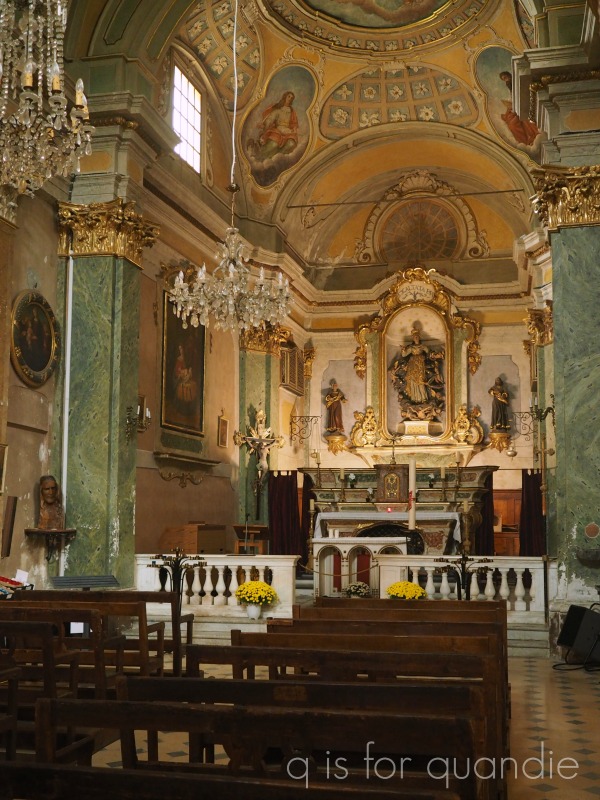 I thought the interior had a very French look with all of the gold, pale blue and crystal chandeliers.

Our guide pointed out the permanent arm holding a crucifix coming out from the pulpit.  Do you see it there in the photo above?  I’m not sure I would necessarily have noticed it otherwise.  She said that the priest’s arm got too tired holding up that heavy crucifix so he had a permanent one installed.  I’m not sure if that’s the true story behind it or not, but it was entertaining.

Le jardin exotique d’Eze is located up at the very top of the hill above the rooftops of the village. 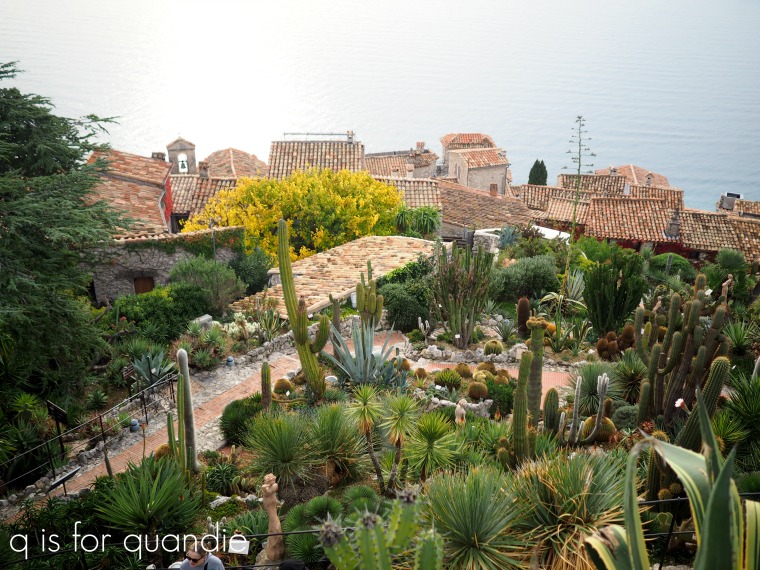 The first time we were in Monaco and visited the Jardin Exotique de Monaco, I was surprised to find that it was mainly a garden of succulents.  That time I was expecting something entirely different, a typical french garden like the one in Giverny that was featured in so many Monet paintings.  But this time I knew what to expect.

I have to admit cacti and other succulents are not my favorites.  I much prefer a lush cottage garden.  But the views from le jardin exotique d’Eze were spectacular.

I don’t think I would have enjoyed Eze nearly as much if we had visited during the summer, but seeing it in November was fantastic. 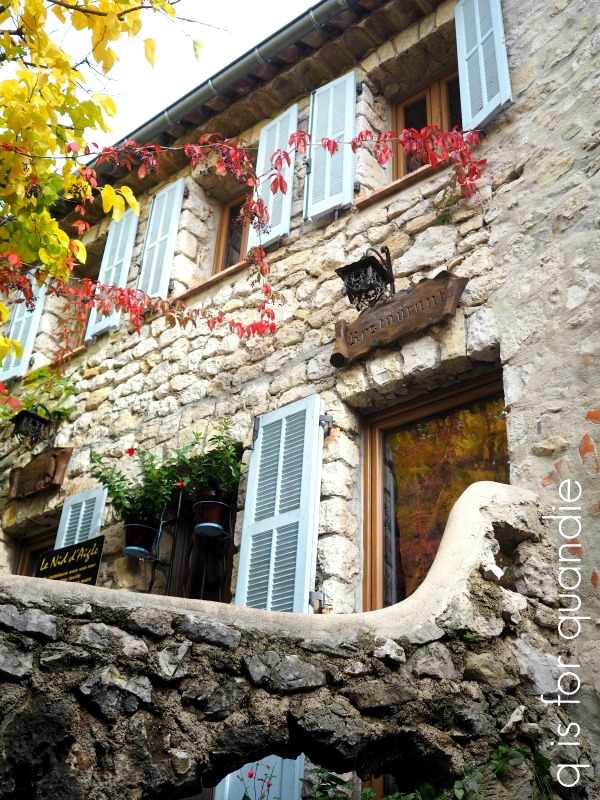 Not only were there fewer tourists, but the fall colors were beautiful too.

So I say if you ever have the chance to visit Eze in the off-season, and you enjoy charming little medieval French villages, definitely go for it!