I’ve mentioned once or twice before that Mr. Q and I like to go on Friday date nights.  Only our Friday date nights involve driving across town to pick up a piece of furniture.  We both really enjoy spending that time together.  But one evening last June I decided to invite my sister along for the ride.

We were driving all the way up to Cambridge, Minnesota to pick up a hutch that I had found on Craigslist.  Cambridge is about an hour north of me.  Normally I wouldn’t go that far for something, but it was a great deal on a lovely china cupboard.  Plus, it was a beautiful summer Saturday evening that was perfect for a drive.  The sellers told me they lived on Spectacle Lake and it was a beautiful area, so I immediately knew that my sister would enjoy coming along to see the scenery.

When we arrived at the appointed address we discovered that it was an old 40’s lakeside resort that is no longer functioning as a resort.  The sellers told us that they’ve been living in one of the old cabins as caretakers of the property, but now the property is being sold, the old cabins will be torn down and replaced with McMansion lake homes.  I’m always a bit bummed out by stories like these.  Those old cabins with their knotty pine walls and screen doors that make a slapping sound when they close have so much charm.

I really wish I’d brought my camera so I could share some photos!  But I didn’t, so I’ll just borrow one from pinterest to set the atmosphere.

After taking a little tour of the vintage cabin, we loaded up the hutch and before we drove away we asked for a dinner recommendation.  The sellers recommended a local place that had fresh fish and a decent patio, so we stopped off and had a delicious dinner before heading home with this in the back of our truck.

That was way back in July.  So what happened between July and November?

Well, I started out planning to paint this piece grey.  I have a customer who had mentioned that she wishes she’d bought the French hutch that I had at my sale last year, and said if I ever found another like it she’d love to have it.  So my plan was to do a similar treatment on this one.

But that plan required being able to remove the fretwork behind the glass.  And well … you know what they say about the best laid plans.

First of all, I didn’t notice until I took a closer look at this piece that the two narrow sides don’t open.  Not the top glass ‘doors’, nor the bottom ‘doors’.  I guess you wouldn’t really call them ‘doors’ at all, they are just stationary panels.  So I couldn’t get to that fretwork from the front.  OK, so next I removed the back of the cupboard.  I figured I could then remove the shelves and easily get to the fretwork from the back.  Um, nope.  The shelves are firmly glued in place.

Then I asked Ken to come over to consult.  He strongly recommended that I find a way to live with leaving the fretwork in place.

I still didn’t want to let my initial vision for the piece go, so I went ahead and painted one coat of grey.  Then two months went by.  I kept procrastinating and feeling guilty for not finishing the hutch, but I couldn’t bring myself to work on it.  Finally I realized what the underlying cause of my procrastination was.  The grey just wasn’t working with the brown wood of the fretwork, and that was keeping me from finishing the job.

So I pulled out my Annie Sloan chalk paint in Coco, a much better color choice with the wood fretwork.  I added a coat of Coco over the gray and realized it was just what I needed.  Once the paint was dry I started to sand the piece to distress the edges and quickly realized that the undercoat of grey was showing wherever I sanded in a way I also didn’t like.

Ugh.  I’d have to add another coat of Coco.  Frustration kicked in yet again and another couple of weeks went by.

With winter weather looming, and a trip to Disney World coming up, I knew I needed to get my act together and get this piece finished.  It’s really too big to work on in the house.  Plus I wanted to use up some Annie Sloan wax that I had on hand and I won’t use that product indoors.

So a few weeks ago when the forecast called for sunny and a high of 75 I took a day off at the day job to just get this hutch finished!

I have to tell you guys, the entire time I was waxing this piece I was cursing my decision to use the chalk paint.  It would have been so much easier to just use Fusion’s Algonquin.  It’s very similar to the Coco and I wouldn’t have had to wax it.

What was I thinking?  I’ll tell you what I was thinking, I wanted to just use up the Annie Sloan products that I had on hand rather than go buy some Algonquin.  Such a foolish choice.  It would have been worth every penny to just buy a pint of Algonquin.

Well, as they say, hindsight is 20/20.  But now the labor is behind me and this hutch really turned out lovely. 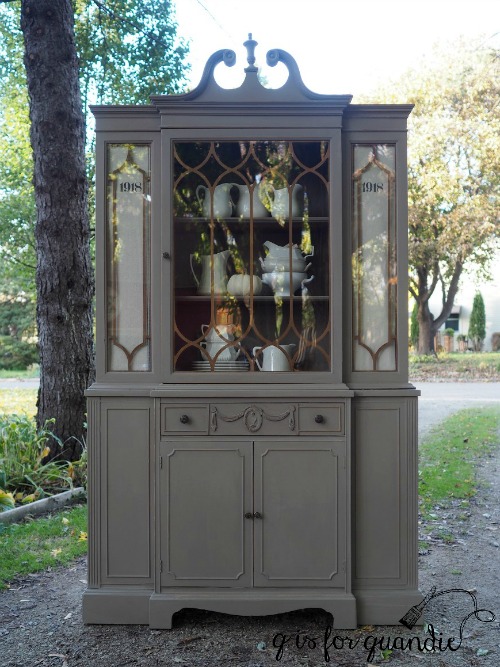 I made a lot of decisions while working on this one.  The first was to stencil the inside back with a French poem.  Since I had the back off anyway, I figured I might as well go for it.  It was a simple detail to add before putting the back on again. 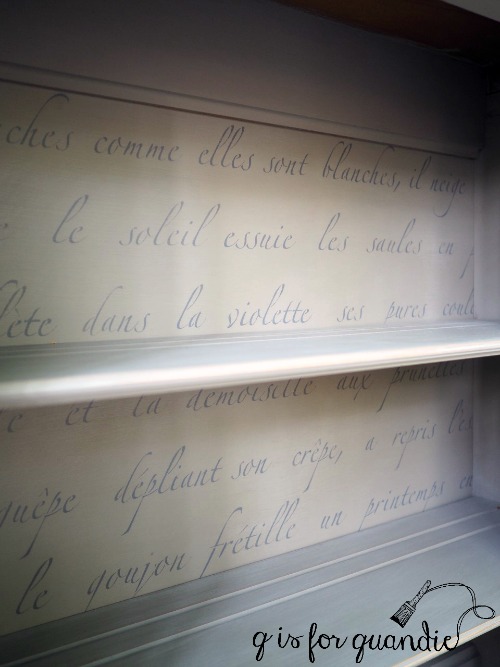 I painted the panel with two coats of the Coco, then stenciled it with an acrylic craft paint.  Once dry, I waxed it with Annie Sloan wax and then put it back on.  I think it adds a great little subtle detail even though it will be mostly hidden behind the contents of the cabinet. 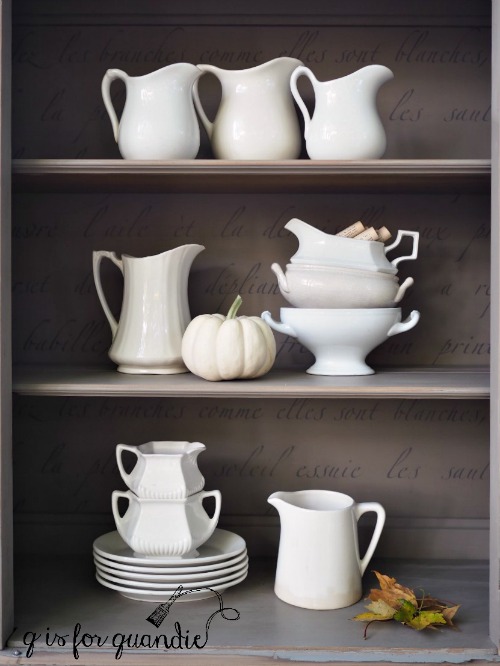 I also added some ‘grain sack’ liners behind the glass on either side of the hutch.  These are just some strips of fabric that I stenciled with “1918”.  They are just tacked into place, so the future owner of the hutch can opt to remove them if they prefer.

I swapped out all of the knobs on this one for vintage brass knobs that I thought suited it better. 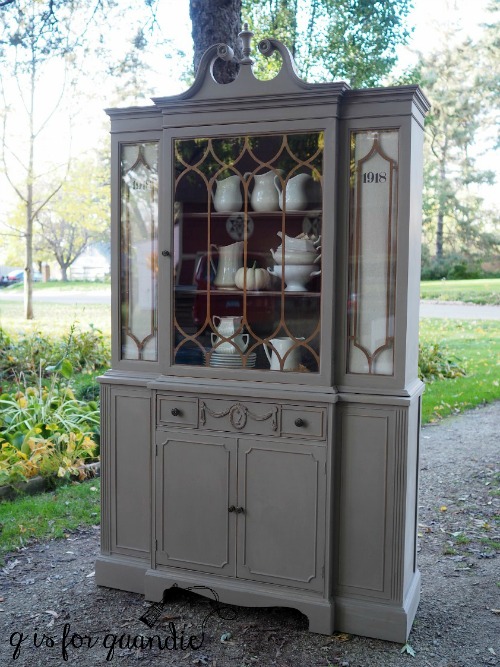 So, a mere 4 months later, this piece is finally done!

It’s such a pretty china cupboard, perfect for displaying a non-collection of ironstone or possibly your grandmother’s china.  Or for a little less traditional look, it could be filled up with books.

This hutch is available for sale locally while it lasts.  If interested, be sure to check my ‘available for local sale’ page for more details.

40 thoughts on “the hutch that took forever.”