Melanie from Lost and Found Decor (the blogger who spearheaded Monday’s Fusion giveaway) recently wrote about her trip to the auction house.  Reading it reminded me of one of my favorite auction stories, so I decided I should share it with you guys!

There is an auction house just a few blocks down the street from me.  They hold an auction nearly every Monday evening.  The owner/auctioneer is quite funny and entertaining.  In a way, attending the auction is similar to live theatre.  It’s definitely worth the trip just to enjoy the show.

Quite a number of years ago I got the auction bug.  I bought a few really cool things that I still have, like the full length mirror in my bedroom that is framed in copper salvaged from the roof of a historic building in Philly (or at least that is what the sticker on the back claims).  Here it is leaning on the wall next to my armoire.

And hey, sidebar note, I have an exciting project coming up involving this armoire … so check back for that in the coming weeks.

In the end though, I realized that auctions were a bad idea for me.  The problem was that my right arm would just fly up on its own accord every time I saw something that I liked.  In the excitement of the moment, my brain didn’t have time to compute the full price with fees and taxes added in.  This particular auction house adds a 15% commission plus 7.125% sales tax to every item.  For example, a dresser that you bid $75 on suddenly costs you something closer to $92.

But the real problem for me ended up being items sold in ‘lots’.  It always seemed like the items I wanted were being sold as part of a ‘lot’ and the other items in the lot were crappy stuff that I didn’t really want.  And to further complicate matters, at that time when you bid on a lot you were bidding per item.  So, if your lot contained 3 items and you bid $25, you were going to pay $25 per item, or $75.  And then you still had to add in that pesky commission plus sales tax.  Yikes!  That’s a lot of math to do in your head in a split second!  In the excitement of the moment your brain is thinking “$25!  What a bargain!” And what it really should be thinking is “$25 times 3 equals $75, plus commission and taxes is $92.  Yikes!”

Such was the case with a vintage birdcage that I really wanted one night.  It was being sold in a lot with two other items.  One was a small rocking chair with a cane seat and the other was listed as an antique folding table.  I didn’t want either of those things, but I figured I could unload them at my own occasional sale and just keep the birdcage.  I can’t remember now what I ended up paying for the lot, but I’m fairly sure it was more than I should have paid for just the cage.  I loaded up my items and brought them home.  I then decided to put the table up and see how it looked.  I first noticed that the legs were a little short.  The table was only about 2’ tall or so.  And weirdly enough, one side sort of tilted up.  It also had a label that said “Gleason Board”.

I immediately got a bad, bad vibe from the thing.  But I’ll admit I was thinking ‘doctor’s office’ at the time, not ‘funeral home’.

I put it in my front hall closet and put it out of mind for the moment.

A few months later I went to the Oronoco Gold Rush (an annual antiques flea market here in Minnesota).  As I was wandering around, what did I happen upon?  A very similar table.  I still remember thinking “Oh look!  One of those tables.  Let’s see how much they are charging for it.”  I walked over and took a look at the tag, which prominently said “antique embalming table”!

I dropped the tag with a gasp and jumped back.  Dear lord!  I had an antique embalming table in my front hall closet!  I don’t think I even noticed the price because I was so horrified.

Later that night as I slept in my bed I had a terrible dream.  I dreamt that the spirits of every person ever embalmed on that table were now inhabiting my front hall closet.  I opened the closet door and there they all were.  I woke with a start and reached over and shook Mr. Q awake as well.  I told him the table needed to be removed from the closet a.s.a.p.  I didn’t care what he did with it, it just had to go.  And by a.s.a.p. I meant ‘right now in the middle of the night’, not just sometime soon.

He ended up putting the table in the trunk of his car.  I think his intent was to get rid of it somewhere eventually, but instead it stayed in the trunk of his car for quite some time.  And as a matter of fact, it was still there when we traded the vehicle in on a new one!  Yep.  We left it in there.  Somewhere out there, someone bought a used car that came complete with an antique embalming table!

Accidentally buying an embalming table sort of ruined auctions for me.  I haven’t gone back since then.  I think I’ll leave auctions to the people who can control the are holding their paddle, do math really fast in their heads, and recognize creepy antiques when they see them!

31 thoughts on “the gleason board.” 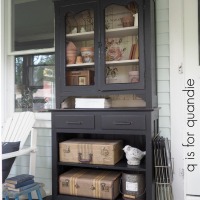