My picker, Sue, found this funky homemade wooden storage box for me a while back. 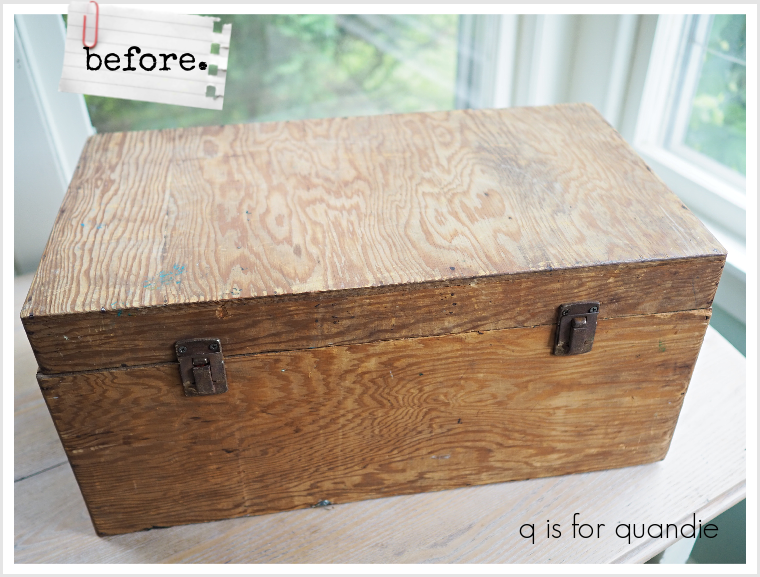 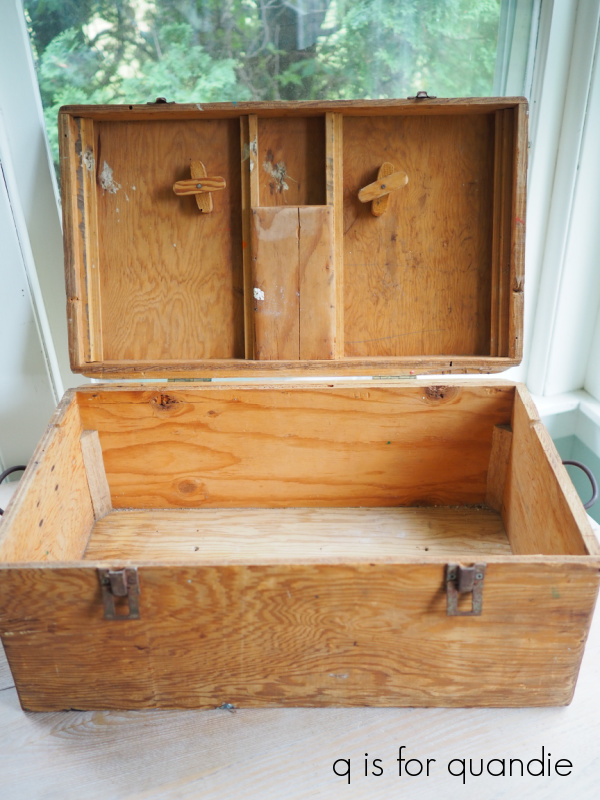 I suspect it was meant for holding some particular item, possible a power tool of some kind?

Although I thought those built in features inside the lid were cool, I felt like the box would be more functional without them, so I removed them.

After giving the box a good clean, I painted the outside in Dixie Belle’s Drop Cloth, and the inside in their Gravel Road.  Once the paint was dry, I took a step back and ultimately decided that I would prefer Sawmill Gravy on this piece rather than the Drop Cloth.  Especially since I planned to do another subtle tone on tone stencil design on the box.  So I painted over the Drop Cloth with Sawmill Gravy.  Then I pulled out the same stencils I used on the spooky nightstand and stenciled the outside of the box using Dixie Belle’s Fluff. 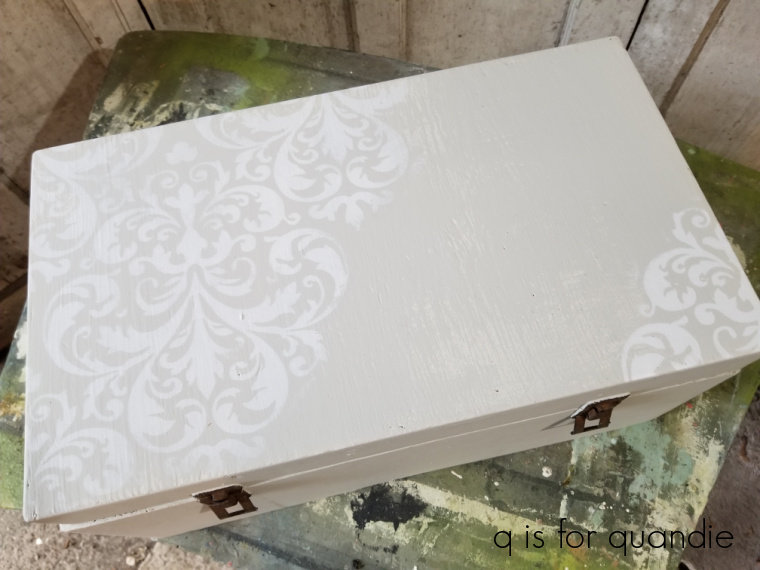 Next up I pulled out one of my French stencils and added some wording to the top of the box, and then a crown to the front of the box. 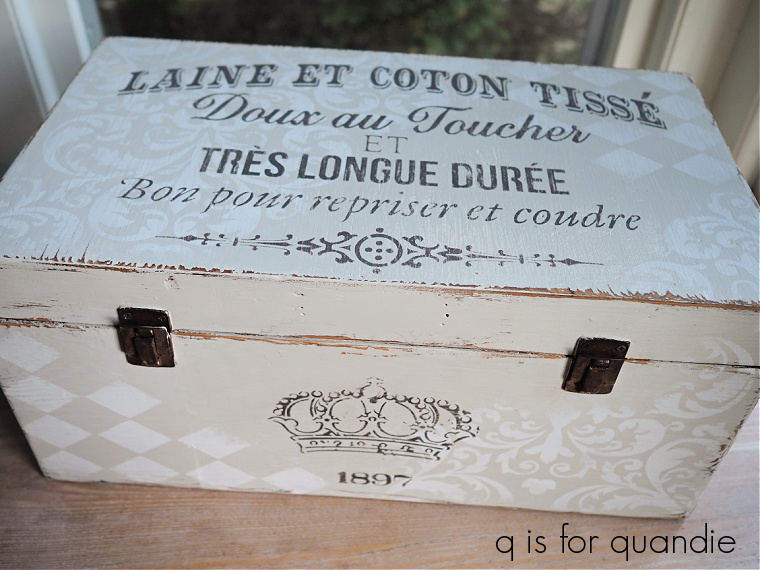 Once that was done, I sanded to distress and gave the outside a coat of clear wax.

Next up I decided to line the inside of the lid with some pretty decoupage paper that I’d purchased a while ago from Roycycled.  Someone here had left a comment once asking if I’d tried this paper, and I had not.  They have some really pretty designs, so I thought I’d give it a go.

Unfortunately, it was a complete failure. 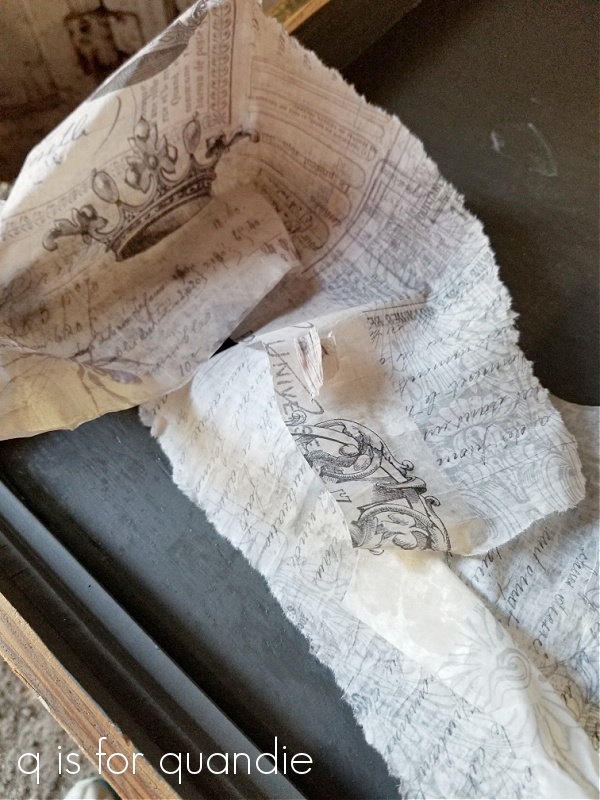 I’m so used to using the re.design with prima decoupage paper, which is pretty much completely fool proof, that I never even considered that this paper would be so delicate.  I used my normal process for decoupaging, I cut the paper to size first, then painted on a layer of Dixie Belle’s flat clear coat, then placed my paper down.  So far, so good.  Then I added a layer of the clear coat over the top of the paper, and it started to wrinkle.  As I tried to smooth out the wrinkles, I ended up tearing the paper instead.  Ugh.  So frustrating!  Then I tried to smooth the tear a bit, and tore the paper even more.

At that point I decided to cut my losses and pull the paper out of there before the clear coat had a chance to dry.

Well, live and learn.  Perhaps it was user error on my part, and I didn’t have quite the right technique for working with the Roycycled paper.  Regardless, I’m going back to using the re.design with prima decoupage tissue paper, and, FYI, they just came out with a bunch of pretty new designs (check them out here).  But for this box, I pulled out an old black & white design that I had on hand from back when I was a content creator for them. 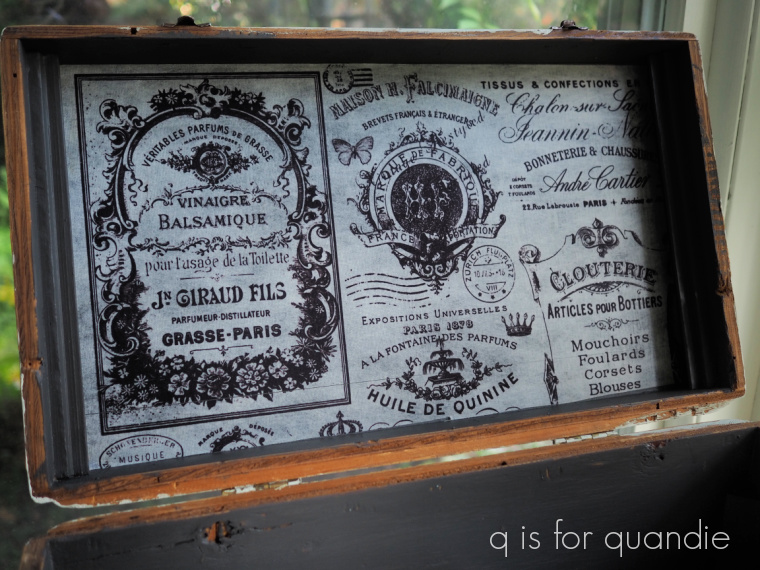 Not a wrinkle in sight.

If you gave up on decoupaging because it was so finicky, or you didn’t like the wrinkles, you really need to give it another go using this stuff.

In addition to using the Dixie Belle flat clear coat over the decoupage paper, I also gave the entire interior of the box a couple of coats for durability.

And now this box could be used to store your favorite vintage linens. 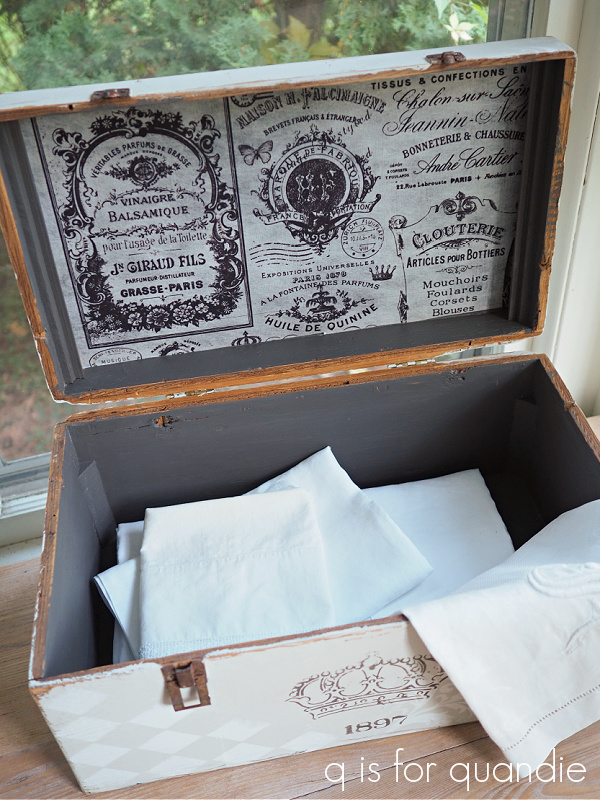 Or maybe a few of your winter sweaters, or possibly some of your Christmas decor.

Really, who doesn’t just need a cool box to store their treasures in?

If any of you locals are interested, this box is for sale and the details can be found on my ‘available for local sale‘ page.

Thank you to Dixie Belle Paint Co for supplying their products used in this makeover.

13 thoughts on “the french linens box.” 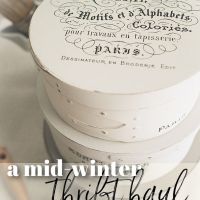 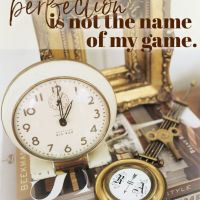 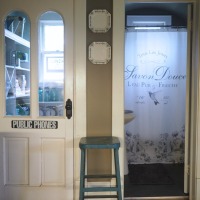 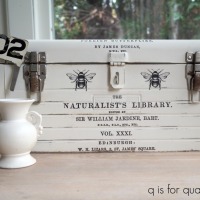 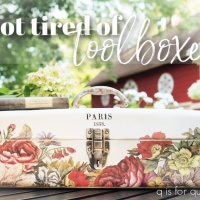