Happy St. Pat’s!  Are you wearing the green?  I haven’t got an Irish bone in my body, but I do love green stuff.

My friend Meggan and I were thrifting again a couple of weeks ago, and for some reason I was finding lots of it.  I came home with this little pile of goodies.

I passed on a lovely mid-century decanter set in green glass with gold details.  I should have grabbed it, but didn’t.  Shoulda, coulda, woulda, right?

I had an idea that the green metal box would make a fantastically junkalicious medicine cabinet, so I decided to try the gel medium transfer method on it.  I found an awesome french graphic on Graphics Fairy, and followed the same method I used last time on the hat box.  I was so excited, and sure that this was going to be amazing.

What went wrong?  I’m really not sure, but the gel medium didn’t stick to the metal.  Picture putting some Elmer’s glue on something, and then being able to sort of peel it right off once dry.  That’s what happened here.  It peeled.  And the more I tried to salvage it, the worse it got.  Eventually I realized that the entire design was just going to peel off.  Did I apply the gel medium too thickly?  Should I have prepped the surface better prior to application?  Or was my idea doomed from the start because the gel medium just won’t work on painted metal?  Or perhaps it would have all been OK if I had added a coat of mod podge on top.  Unfortunately, I don’t have any answers for you.  Just a warning that sometimes the gel medium transfer is not all it’s cracked up to be.

In the end, I was able to remove the whole thing quite easily by scraping it off with a razor blade.  Then I started over with a stencil and some paint.  A much better choice for this piece. 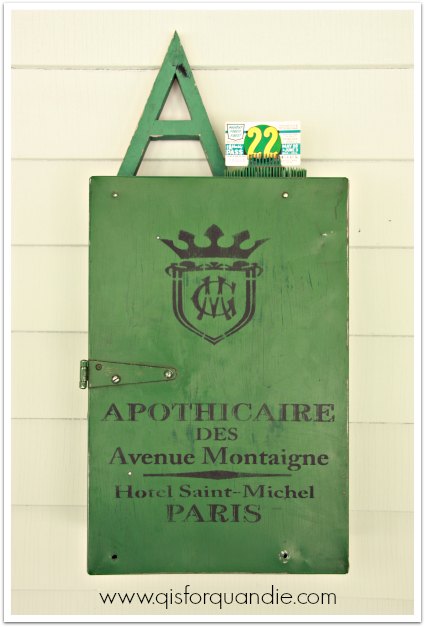 I don’t love this design as much as the first one from Graphics Fairy, but it still adds a cool vibe to the box.  I had Ken put some holes in the back so I could hang it on the wall as a cabinet.

Meggan spotted the glass that is tucked inside the cabinet for me, isn’t it fab?  It came home from the thrift store the same day.

In addition to the fab green cabinet and the little french glass, I also purchased the green frame that is in the back of my first photo.  I just loved the patina on the frame, and the green color.  I knew it would be perfect for some Paris in Color postcards in green.  Are you guys familiar with Paris in Color?  It’s a book of photography by Nichole Robertson.  Check her out if you haven’t seen her work.

The postcards fit perfectly in the existing mat, and they are so much better than the 80’s tulip prints that were there originally.

I hope you enjoyed this little touch of green, now go out and drink some green beer and beware of bad leprechauns!

14 thoughts on “wearing of the green.” 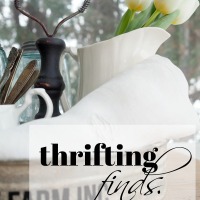