When Mr. Q and I were planning out what to do in the various ports of call on our Adriatic cruise last November we tried to schedule in a bit of variety.  As we were researching our options, it seemed like we were ending up with lots of visits to ancient archaeological sites like Herculaneum, Diocletian’s Palace in Split and the temple of Hagar Qim in Malta.  So when it came to Messina, Sicily we wanted to do something a little different.

We narrowed it down to either a wine tasting tour or a ‘Godfather tour’.  I would have opted for the wine tasting, but Mr. Q doesn’t drink wine so that seemed a tad selfish on my part.  So the Godfather tour it was.

Ironically, neither of us are fans of the Godfather movies.  In fact, we could barely even remember having watched them.  But the tour went to two small hill towns in Sicily that looked absolutely charming and that’s what drew us in.  We did watch The Godfather a few weeks prior to our trip just in case we needed any context for the tour, which as it turned out we did not.

The first stop on our tour was the town of Savoca, a tiny hilltop village that was reached via a narrow, winding road. 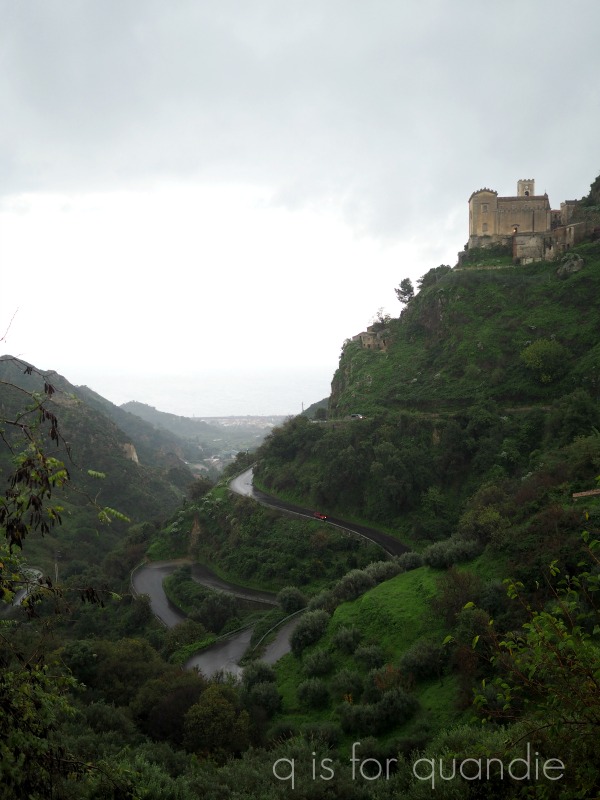 This was the rainiest day of our entire trip and going up that wet, narrow road in a huge bus was maybe a tad nerve wracking.  I kept imagining the newspaper headlines at home, American tourists die in tragic Italian bus accident.

I’ll admit, I had to close my eyes a few times.

But it was definitely worth it.  Savoca was utterly charming.

The first site in Savoca was the Bar Vitelli. 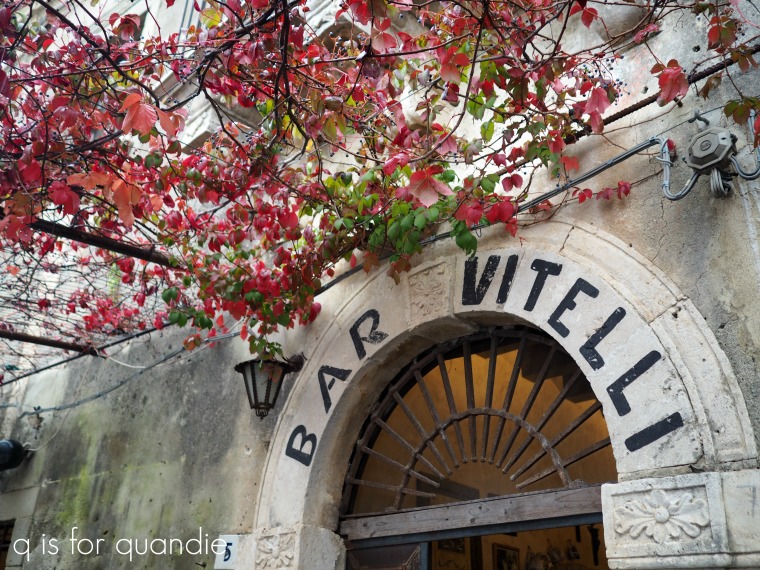 In the film this bar is owned by Apollonia’s father.  Our guide told us that at the time of the filming this wasn’t a bar at all, but rather a villa.  Francis Ford Coppola turned it into a bar just for the movie.  Once the movie became a blockbuster, Bar Vitelli was there to stay. 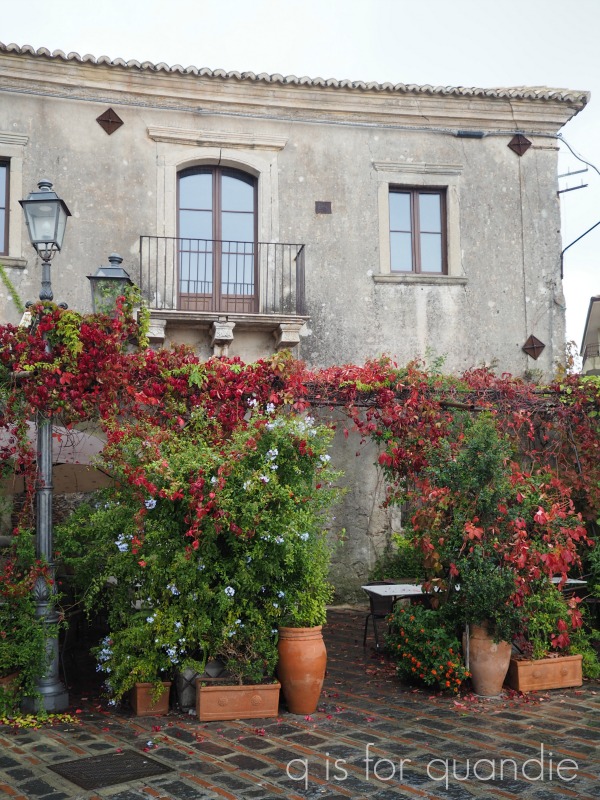 It now functions as both a bar and a small ‘museum’ (ie. tourist trap) with a collection of photographs taken during the filming.  It was a tiny little place though, and there definitely was not enough room for both a bus load of tourists looking at photos and patrons trying to get a drink.  Since it was raining cats and dogs at the time, the crowds were struggling not to spill out onto the patio.  Mr. Q and I gave the inside of the bar a pass and headed to the next site while huddled under our umbrella. 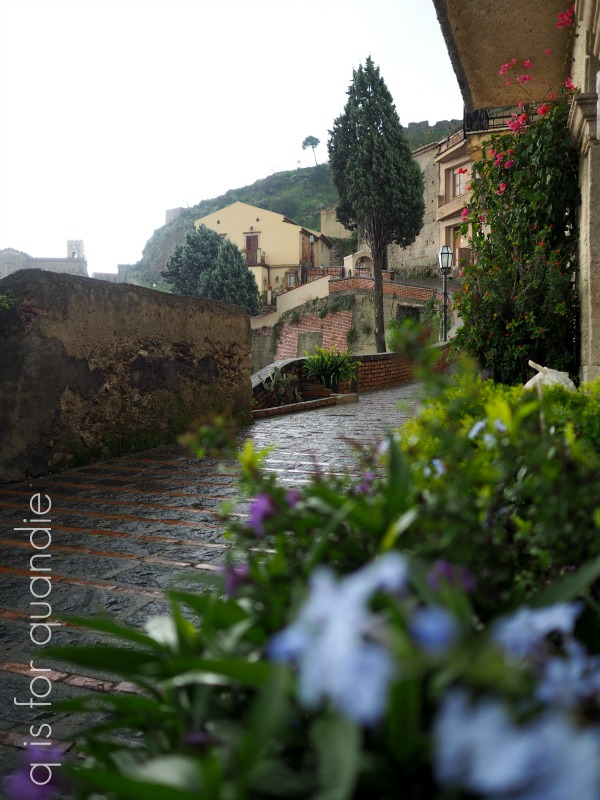 Maybe the rain was a good thing because as you can see, we had the place pretty much to ourselves. 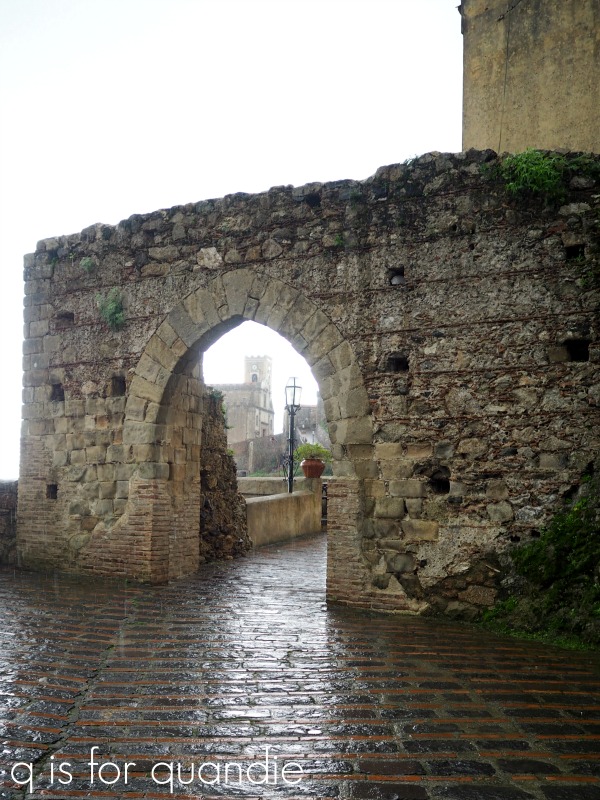 We headed uphill to the Chiesa di San Nicolo/Santa Lucia where the wedding scene between Michael Corleone and Apollonia was filmed.  If you scroll back up the beginning of this post, this is the building that can be seen at the top of the hill in my first photo. 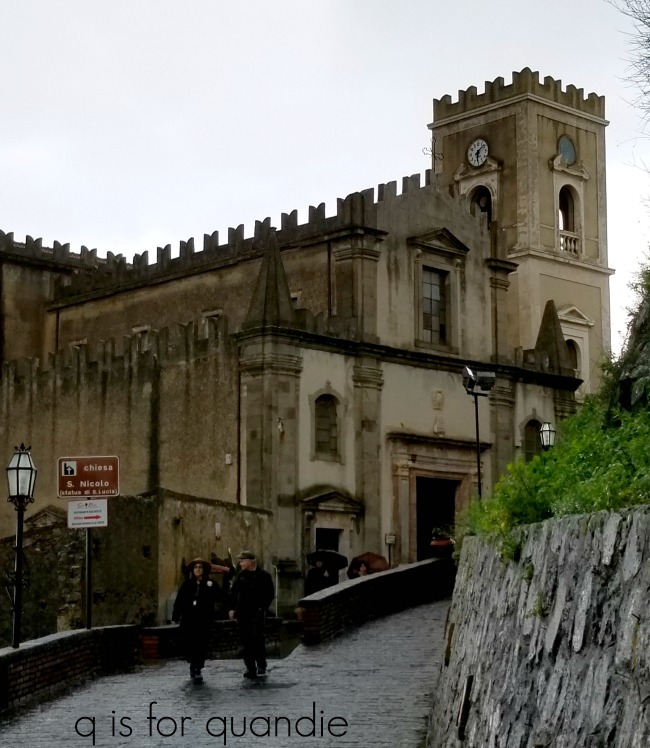 After seeing inside the church we had a very short time to stroll around the tiny village before returning to the bus to head to our 2nd stop, Forza d’Agrò. 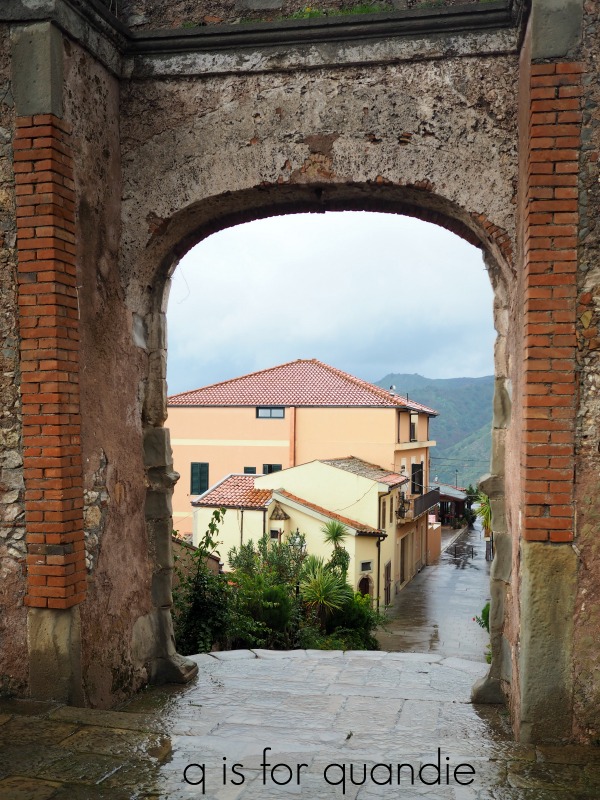 Forza d’Agrò is another charming little hilltop village, and it required traveling even more super steep and winding roads to reach it.  Once there we trooped around after our guide for a bit, first visiting the Church of Sant’Agostino. 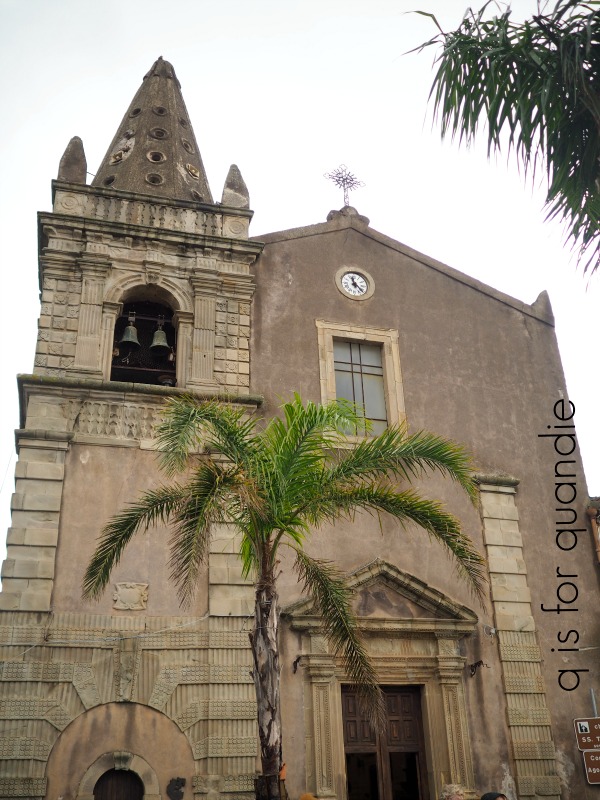 To be honest, I haven’t found any reference to this church actually having been used in the film. 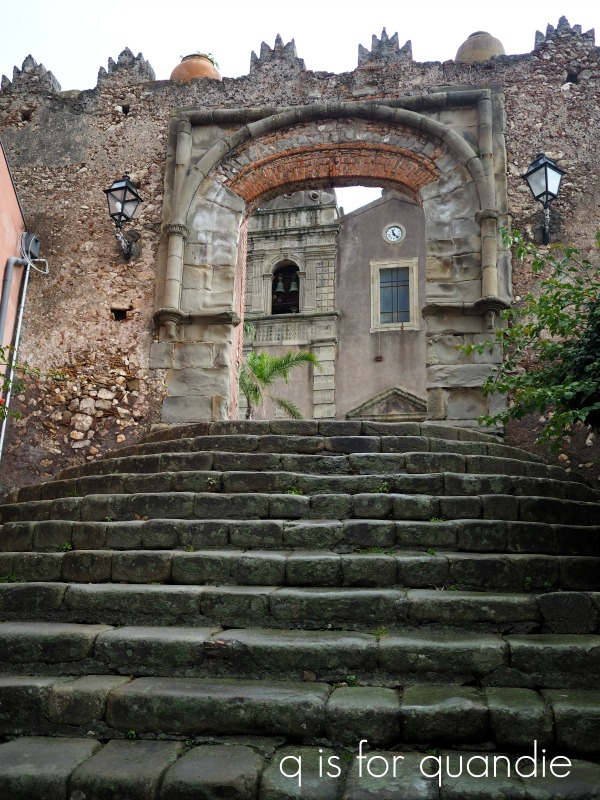 It was a lovely spot though. 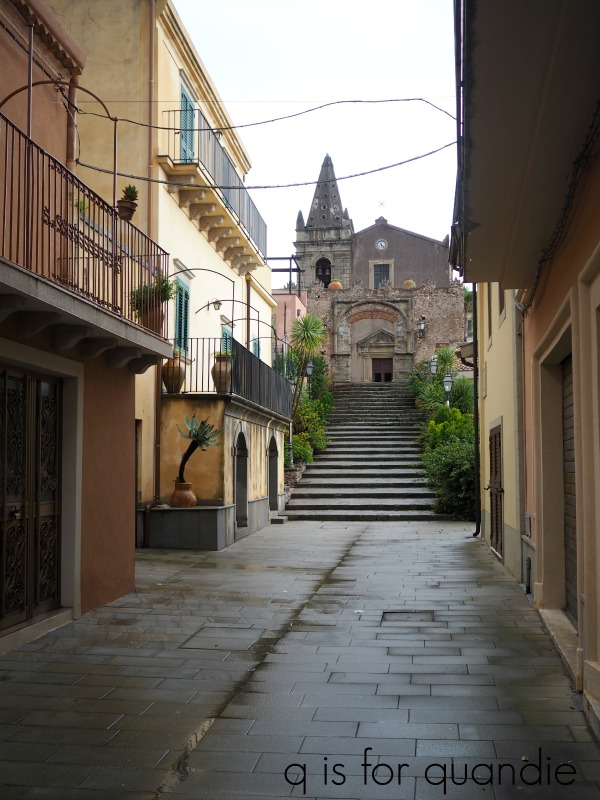 Next we stopped in front of the Cattedrale Maria S. Annunziata e Assunta which was another filming location for the movie. 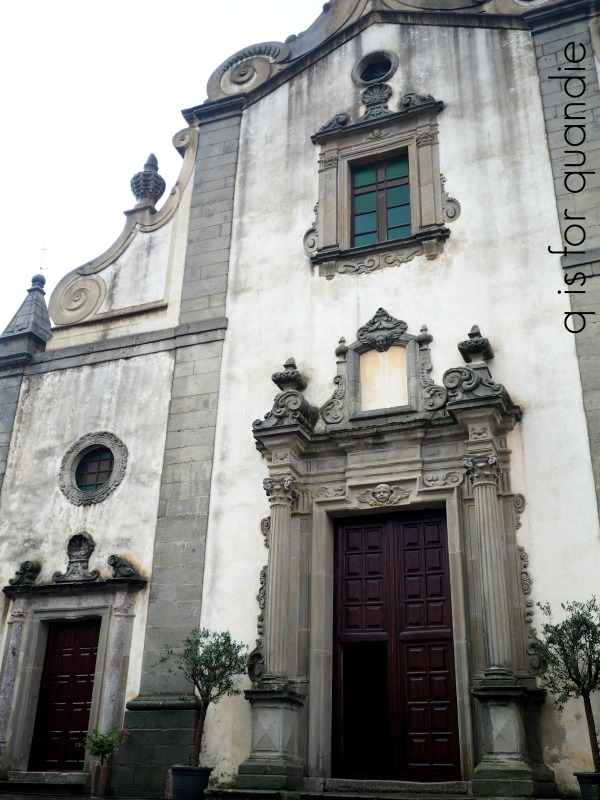 Isn’t that a gorgeous old church?

I was also fascinated by this building opposite. 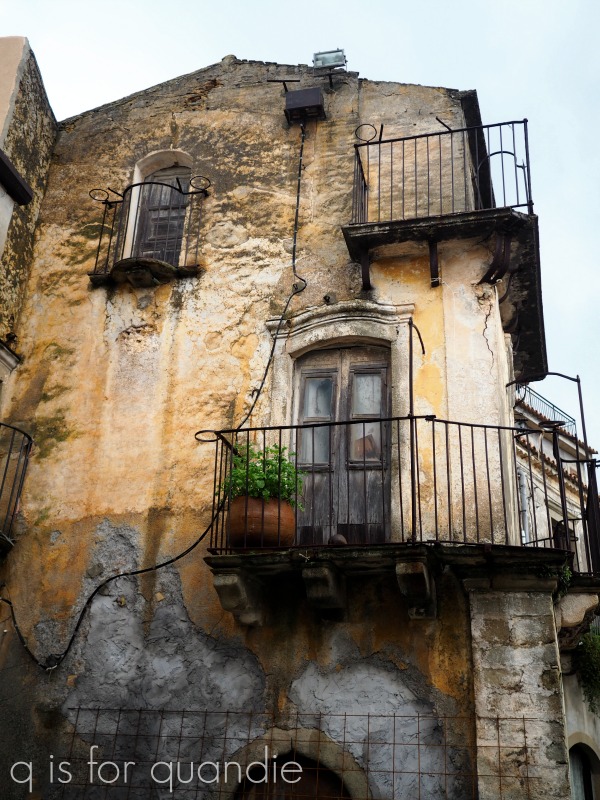 There is just something about that crumbling stucco and those old wooden doors that appeals to me.

We were getting more wet and cold by the minute at this point though, so I made Mr. Q an offer he couldn’t refuse.  I suggested we stop in at a little cafe for a cappuccino. 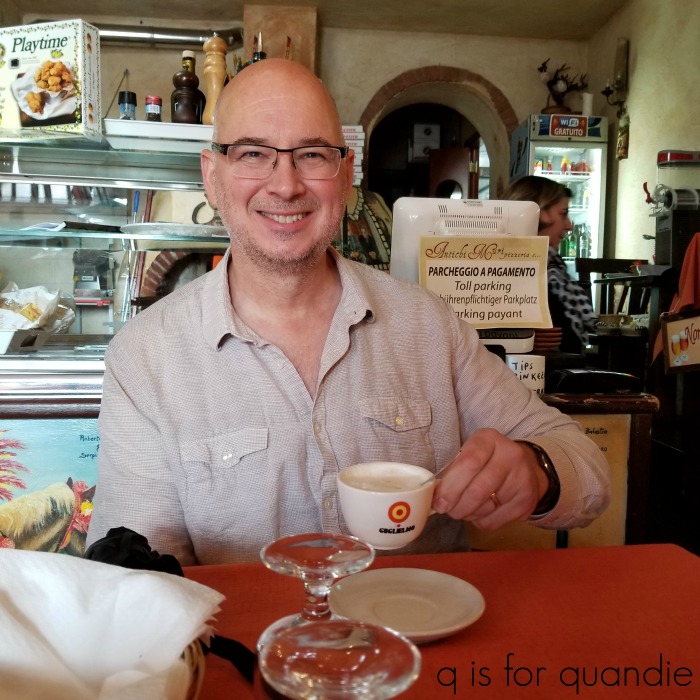 I left him there enjoying a 2nd cup while I wandered around and took a few more photos of this picturesque little town before we had to head back to the bus and return to our ship. 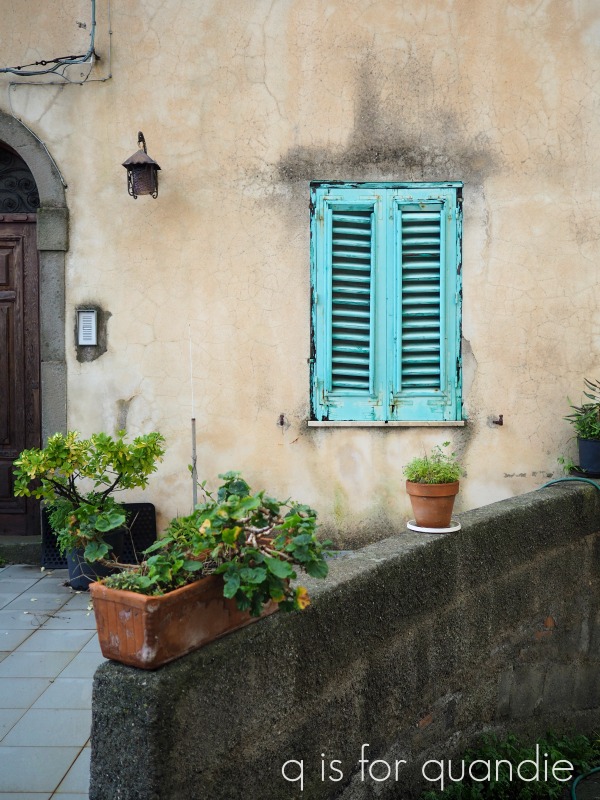 No need for faux finishes here, these are genuinely chippy or rusty! 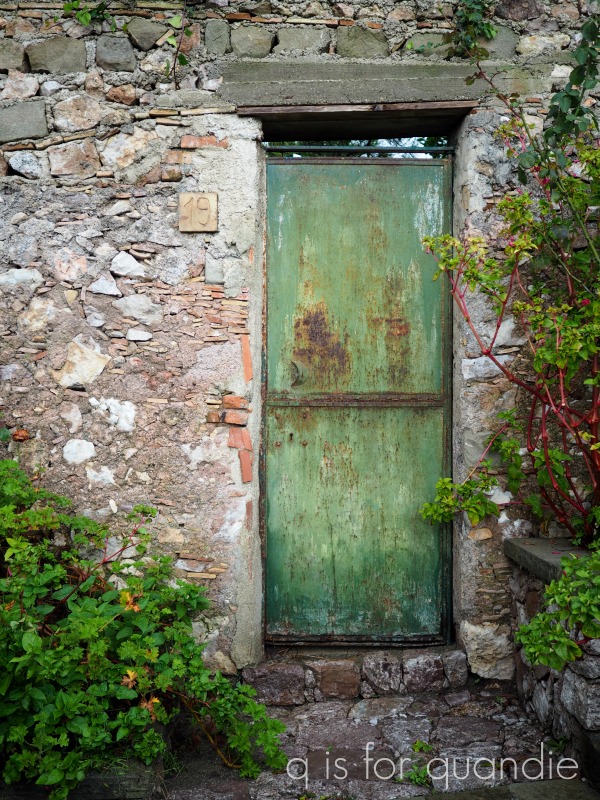 They definitely provide some inspiration for creating a faux finish though, don’t you agree?

I loved this fountain that was in the middle of the town square. 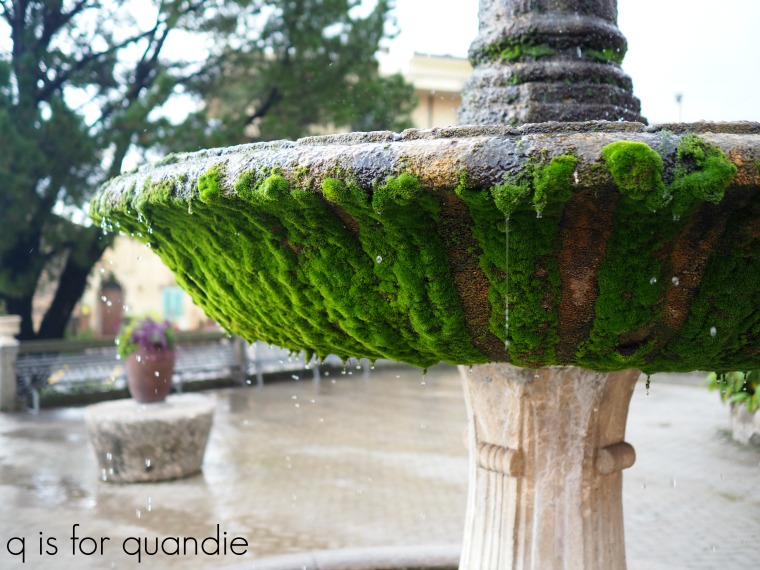 I wish I could get moss like this to grow on my own fountain.  I suspect it would require a slightly warmer climate than we have here in Minnesota.

I hope you enjoyed this visit to Sicily and some of the filming locations there for the Godfather films.  I’m hopefully back on track with my Wednesday travel posts and next week we’ll be heading to Malta! 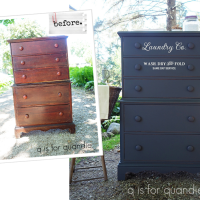 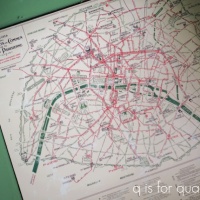 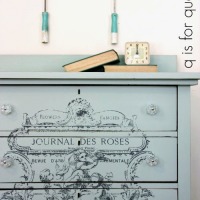 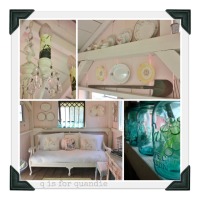 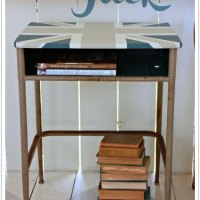 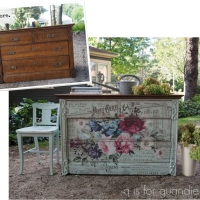