I had originally planned to share the story of our recent Adriatic Explorer cruise in chronological order from start to finish, but today I simply had to jump ahead to the end.

Well, two reasons really.  First of all, our visit to the Luigi Bevilacqua workshop inspired a craft project that I want to share with you later this week.  And second, I just couldn’t wait any longer to share this post!

People always ask, ‘what was your favorite part of your trip’ and the answer this time is definitely our tour with Luisella Romeo, a private guide in Venice.

Let me start at the beginning.  Shortly after we booked our cruise, Mr. Q was chatting with someone and she mentioned having toured this incredible workshop in Venice where they still make velvet fabrics by hand.  She said it was one of the coolest places she’d ever toured.  When Mr. Q mentioned it to me, I was intrigued.  Right around that same time, not only was I looking into hiring some private guides for our trip but I was also looking for something unique to do in Venice.  Since we were going to be there on my birthday we were willing to splurge a bit on something special.

That was when I found Luisella Romeo’s website.  Her carefully curated selection of tours looked fantastic and her website was so beautiful, so I checked her out on tripadvisor.com.  She had over 650 reviews and every. single. person. rated her as excellent and many wrote positively glowing reviews.  This is almost unheard of, right?  I mean it’s nearly impossible to make everyone happy.  Usually there is at least one incredibly picky customer that you simply can’t please, but not so with Luisella.

So I contacted her via email and asked if she could arrange a tour for us that would include the Luigi Bevilacqua workshop.  Several exchanges of emails later, we had an itinerary planned and everything arranged.

Luisella met us in Piazzale Roma at the end of the Venice People Mover.  The People Mover is a monorail system that has just three stops, the Tronchetto parking island, the Marittima cruise terminal and Piazzale Roma which is pretty much the entry point into Venice for most people.

Luisella was so charming and enthusiastic right from the start.  I knew we were going to have an amazing morning with her.  She started off leading us through the Piazzale Roma which was thronged with people coming and going.  But after just a few moments we were deeper into the Santa Croce neighborhood on some nearly empty … um, what do you call them? surely not streets … alleys?  corridors?  sidewalks?  passageways?

Whatever you want to call them, there is just no other city like Venice!

Luisella led us up to this very unassuming building.  Once there I’m pretty sure she used a secret password or some kind of coded knock on the door. 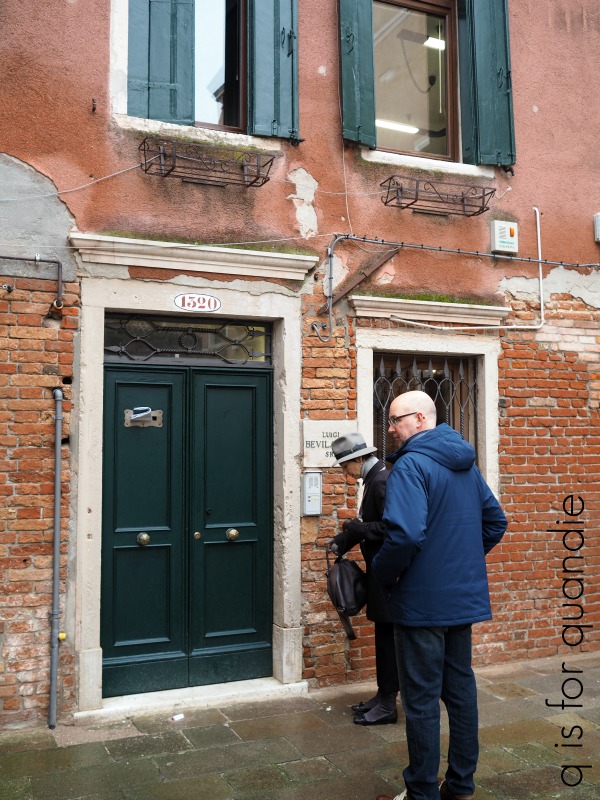 This reminded me of that moment in Charlie and the Chocolate Factory when Willy Wonka opens the door to reveal the magical wonderland of chocolate inside.

Only instead of chocolate, this place was filled with delicious velvet fabrics.

And one of the other things that caught my eye immediately was this old door that was just tucked behind some equipment. 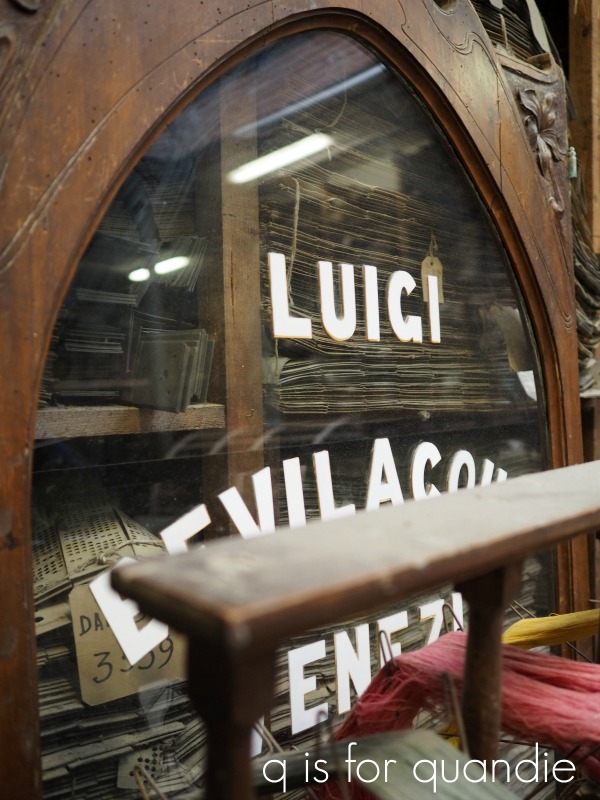 You can probably just imagine how badly I wanted to dig that door out and get a better photo of it (and then possibly tuck it into my suitcase to bring it home with me), but instead I reminded myself that we were there to see some velvet weaving, not a fabulous old door.

Once upon a time there were as many as 1,200 weavers in Venice making silk fabrics.  However, over time such things as Napoleon’s decree that such fabrics should be made in France rather than in Italy, as well as the industrial revolution and the invention of mechanized production methods, contributed to the downward slide of hand weaving velvet out of silk threads.

Then along came Luigi Bevilacqua in 1875 and he saved several 18th century wooden looms from their imminent demise. 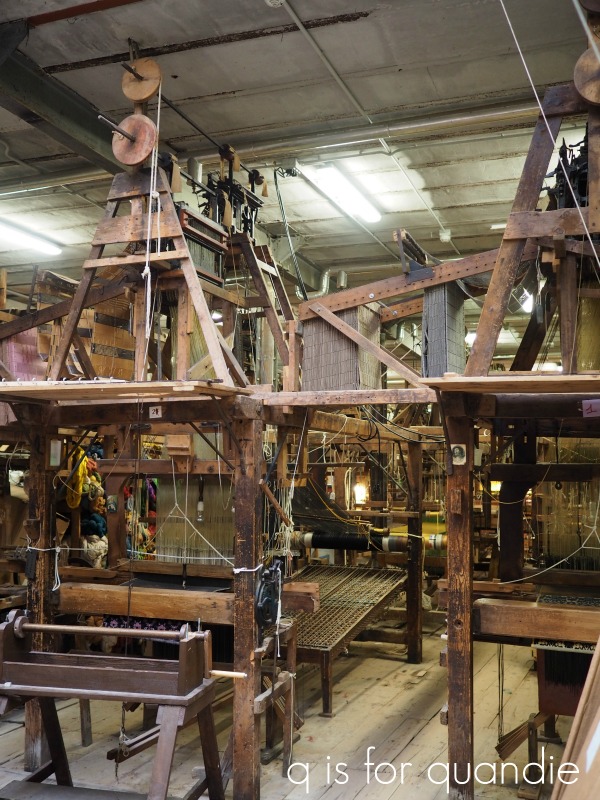 It’s tempting to think that I took that photo in a museum, but this is no museum.  It’s a functioning velvet weaving workshop.  There were a couple of women working on the looms while we were there, although I didn’t take their pictures. 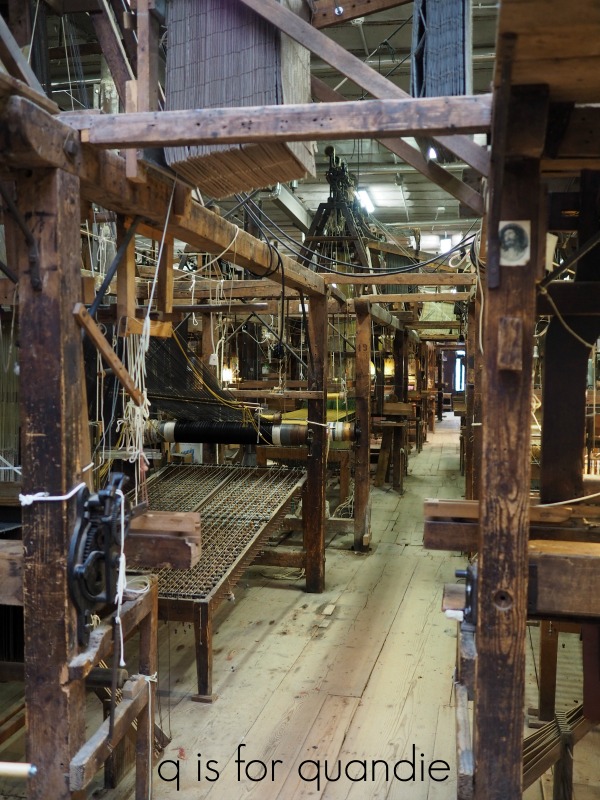 One of the many challenges facing the Luigi Bevilacqua workshop is finding craftsmen who can maintain and repair these looms.  Clearly they need a ‘Ken’, or more accurately they probably have a ‘Ken’ but simply don’t know what they will do when he gets too old to continue working on the looms (I can totally relate to this feeling).

By the way you guys, this was a completely private tour.  It was just Mr. Q and I, our guide Luisella and the Bevilacqua employee who was a lovely woman named Anna who only spoke Italian.  Luisella translated everything for us.

The first thing we saw were all of the patterns. 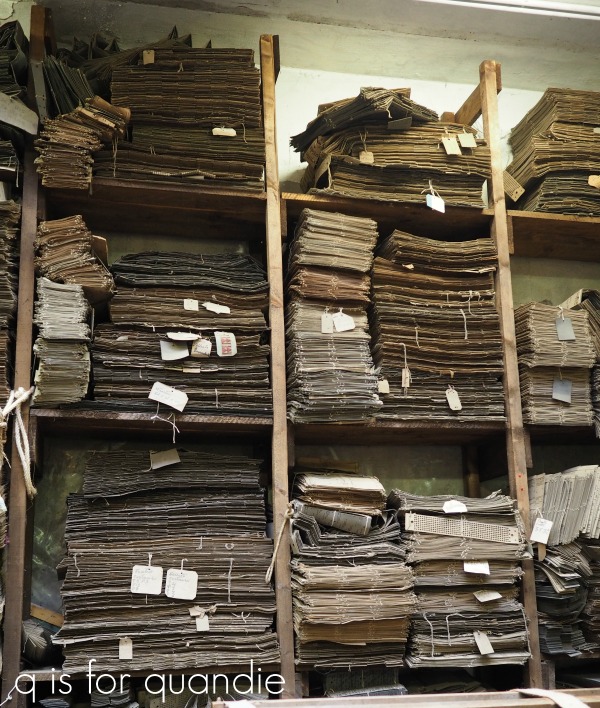 Don’t quote me on this, but I think our guide said they have more than 3,500 patterns.  The patterns are made with punched holes in cardboard.  Each hole in the pattern corresponds to just one thread.

Honestly, I am totally unable to comprehend how these pieces of cardboard with holes punched in them translate to these gorgeous patterns of velvet …

but somehow they do. 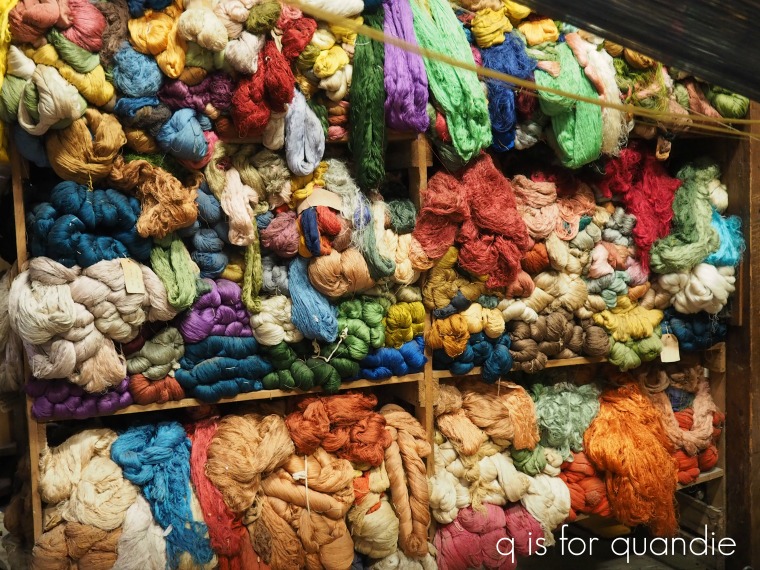 All of the silk threads that are used in making the velvet are hand-knotted onto bobbins, and each bobbin is individually weighted to maintain the proper tension (you can see the little lead weights hanging from each one).

The number of bobbins depends upon the complexity of the design and can range from 400 to as many as 16,000!

And then the weavers take these threads and turn them into this.

It really does seem as though there is some kind of magic at work.

Before the end of our tour we learned the difference between ‘cut’ and ‘curly’ threads. 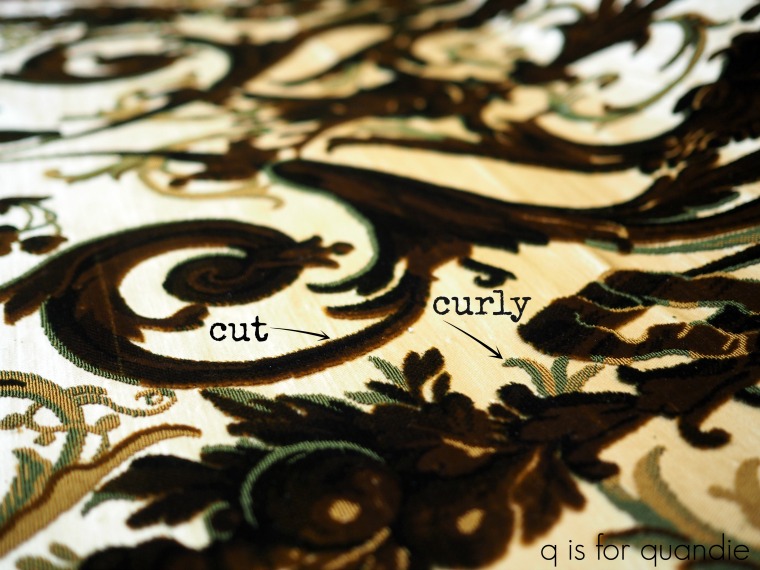 The ‘curly’ threads are uncut loops of silk while the ‘cut’ threads started out as ‘curly’ threads but were cut by the weaver.  The same color of thread can look so different depending on whether it is cut or curly.

After seeing all that goes in to making this fabric, and learning that a weaver can only produce about 12″ of fabric in one day, I quickly realized that this beautiful handmade velvet was never going to be in my price range.  So I wondered, who buys it and what do they use it for?

Originally the velvet was mainly used for either upholstery, draperies or wall coverings.  Can you just imagine what it would cost to cover an entire wall with this stuff?  Customers have included the White House, the Kremlin, and the Göteborg Stadsteater (that’s City Theatre) in Sweden.  But these days some high end designers are using the velvet for clothing and accessories as well.

At the end of our tour we stopped in at the tiny little showroom where there were some items for sale including handbags and belts.  The one handbag I asked about was €1,500 (or about $1,700 American).

Yep, definitely out of my price range. 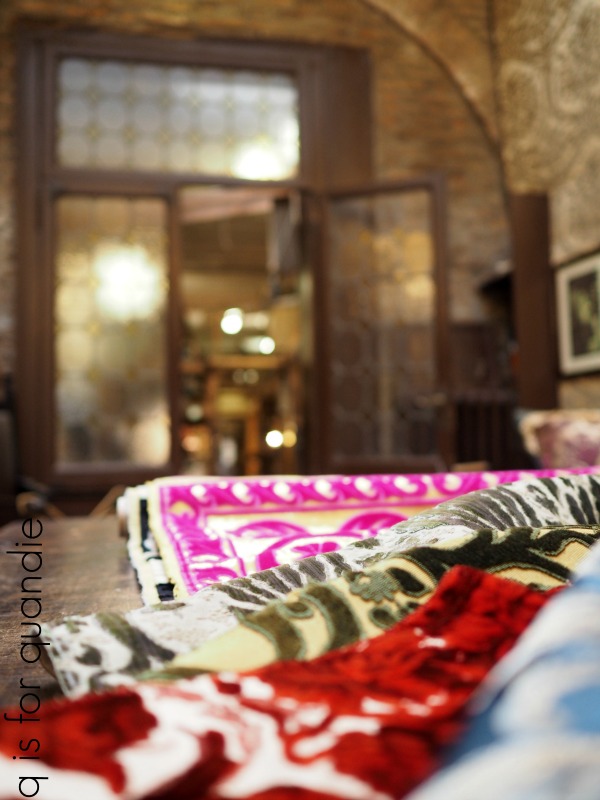 Still, it was amazing to tour the workshop and learn about the process of making these beautiful velvet’s.  It was perhaps the closest thing to traveling back in time that I’ve ever experienced. 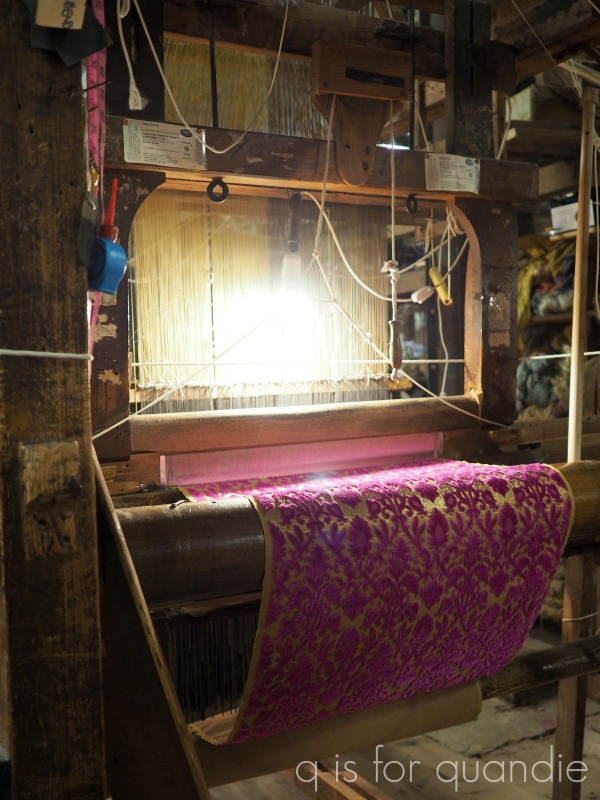 This beautiful hot pink velvet on a gold background inspired me to try something creative, so be sure to check back on Friday to see how it turned out!

And if you happen to be traveling to Venice any time soon, I can’t recommend both Luisella and touring the Luigi Bevilacqua workshop enough.  They are absolutely worth the splurge!

43 thoughts on “traveling back in time.”