Happy Wednesday!  It’s time for the next segment from my series about our May trip.

Edinburgh, Scotland is another spot in Europe where your ship is a distance away from the city centre.  Large cruise ships will anchor near the Firth of Forth Bridge (which, let’s face it, is just fun to say).

You’ll take a tender (a small boat) to the pier in South Queensferry (and maybe you’ll be greeted by some awesome bagpipers like we were).  From there, you need to find transportation into Edinburgh.

This is a port where Mr. Q and I decided to fly by the seat of our pants, sort of.  We didn’t have a specific plan for getting into Edinburgh from South Queensferry.  The ship offered an ‘Edinburgh on your own’ shore excursion option for $69 per person.  It included a bus ride into the historic district at a specified time, about 5 hours to explore the city on your own, and then a return trip by bus at a specified time.  That seemed like a pretty steep price for what was basically a shuttle service with no flexibility at all.

So I followed a hunch that I had based on lots of travel experience, that there would be some sort of independent shuttle service that would be much cheaper.  And I was right.  As soon as we walked off the pier we were met by a sign for a shuttle service to Edinburgh that cost £10 (or around $13) per person round trip.  Plus the shuttle departed and returned every half hour up until 5 pm.  You could time your stay to suit your wishes.

Wowza, right?  The ship was charging a whopping $56 more per person for less flexibility.  This sort of thing is a regular occurrence on cruise ships.  If you ever take a cruise, just be aware of this and know that there are usually lots of options outside of the ship sponsored shore excursions.

Mr. Q and I hopped on the shuttle and after about 30 minutes or so it dropped us off in the heart of Edinburgh, just behind Edinburgh Castle. 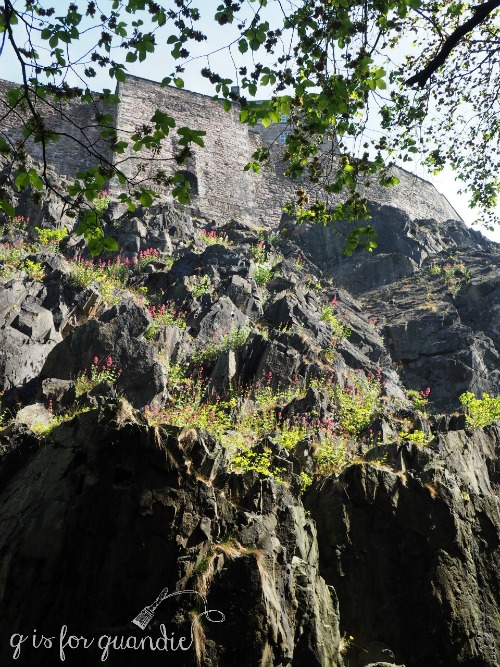 Edinburgh castle sits on top of the remains of an extinct volcano.  There has been some sort of settlement on this spot since the Bronze Age, which totally makes sense because it’s a very defensible position.

We walked around to the front and then up the hill to the Castle only to discover that it was completely overrun with tourist groups, people following guides holding up those flags so their followers could keep up.  We managed to make our way all the way up to the entrance of the castle and then we looked at each other and we both said “nope, not doing it.”  We just couldn’t convince ourselves to battle our way through the crowd to see the Castle (the most visited tourist attraction in Scotland).

So we turned around and headed down the Royal Mile only to find that was where the rest of the tourists were!

I haven’t mentioned it yet, but Edinburgh was having unusually warm, sunny weather while we were there.  It was full sun and in the lower 80’s.  We thought we had come prepared for Scottish weather with our rain jackets, umbrellas and scarves.  As it turned out we weren’t prepared for lower 80’s at all.  We had no sunscreen, no hats, no shorts.

I suspect the gorgeous weather brought everyone out to enjoy the sunshine, tourists and locals alike.

We had a little more than an hour to kill before our planned Book Lovers Tour, so we decided to get out of the sun and away from the crowds by heading into the Scottish National Gallery.  This photo is taken while standing at the entrance to the National Gallery looking out on Princes Street Garden.  As you can see, people were out in droves enjoying the park as well.

We didn’t have time to see as much of the museum as we would have liked, but did see some beautiful artwork and enjoyed the peaceful atmosphere inside.

Next we headed towards the Writers’ Museum to take the Book Lovers Tour with Allan Foster.

Allan led us around the historic center of Edinburgh while sharing stories about famous Scottish authors like Arthur Conan Doyle, Alexander McCall Smith and Robert Burns.  He showed us the coffee shop where J.K. Rowling wrote portions of her Harry Potter books.  None of the locations were particularly fascinating on their own, but Allan was a great story teller and that’s what made the tour so fascinating.

The tour concluded at the famous Greyfriars Cemetery, supposedly the most haunted spot in Edinburgh.  Considering Edinburgh must be a pretty haunted place, that’s saying a lot.

I’ve seen lots of photos online of a misty, spooky Grefriars, but all of my photos have blue sky and sunshine.  Not quite as atmospheric!  It’s a bit more difficult to imagine spooky ghosts under these conditions.

After checking out the cemetery we found a kiosk selling bottled water, which we badly needed.  We were hot, sweaty and worn out, so we made our way back to the designated spot for catching the next shuttle back to the pier.

We really just barely scratched the surface of this uniquely beautiful city.  This is definitely a spot that I would like to return to someday and see much more in depth.  Maybe we could even brave the crowds and head into the castle next time.

But for now we say goodbye to Edinburgh.  Next Wednesday we head to Newcastle upon Tyne, England.  Be sure to check back to read all about the final port of call on our trip and the fabulous Beamish open air museum!

I gave this linen press dresser an entirely new look with the help of some @dixiebellepaint in a color called Collard Greens and the @ironorchid_design transfer called Midnight Garden. Check out all of the details on my blog, qisforquandie.com!
Have you jumped on the raw wood bandwagon? I did a little experimenting to compare stripping with oven cleaner v. stripping with CitriStrip and, spoiler alert, I probably won't ever strip furniture with oven cleaner. I ended up stripping this one with CitriStrip and after about 500 other steps, in the end it turned out rather fab. Head over to my blog, qisforquandie.com, to see how much work went into this piece!
Today on the blog I'm sharing a quick and easy tutorial on making dried hydrangea wreaths with paniculata hydrangeas. If, like mine, your paniculatas are prolific bloomers, this is a great way to use some of those gorgeous flowers. Be sure to check it out at qisforquandie.com
Just thought I'd share my whisk brooms with #perfectlyimperfectprims. They've been released from their cages since this photo was shot, but maybe I need to get them out and do some fall decorating!
Today on the blog I'm sharing the makeover of a parlor table. The difference is night and day. Be sure to check it out!
I shared some tips for drying hydrangeas on the blog the other day. The Annabelles are dried and ready to go, next up I'll be drying the Limelights. Be sure to check out the blog if you need some advice on drying your hydrangeas!
I'm almost done giving my potting shed a makeover (hmmm, only took me all summer). Today on qisforquandie.com I posted the final makeover project, a plywood chest with a new personality thanks to some @dixiebellepaint in Drop Cloth and Honky Tonk Red. Be sure to check it out!
Today on the blog I'm sharing several thrift find makeovers including this cutting board that has a new look thanks to some @dixiebellepaint products. Be sure to check out the post!
Today I'm the blog I'm sharing some quick photos from a garden party at the lovely home of @eike_nancy and her husband.
Today I'm sharing a fun little makeover of an old wooden recipe card box. I used some @dixiebellepaint and a few random transfers from three different brands. Be sure to check it out.
I spruced up an old metal roller skate case with some @dixiebellepaint and a stencil from @ellenjgoods, now it would be perfect for storing old photos ... or I suppose if you still happen to have some roller skates you could keep them in style with this case. Check out all of the details at qisforquandie.com
This morning I'm sharing some of my successes, and failures, in my planters for this season. I've had a few of both! Be sure to check out my post at qisforquandie.com
Loading Comments...
%d bloggers like this: