First up, congrats to Debbie Dee!  I drew her name at random to win my giveaway from last Friday and I’ll be getting her prize shipped out just as soon as I get it boxed up and send Mr. Q to the post office 😉

In the meantime, in my post about my mom’s patio makeover, I mentioned that she downsized her home at the end of 2020.  As a result, she was clearing out and getting rid of things.

She phoned me one day while she was in the midst of that process and happened to mention that she had thrown away the scrapbook that her mother made of a family road trip they took out west in 1953.  I believe my response was “You did what?!!”

Of all the things she could have thrown out, she chose that scrapbook because ‘it was falling apart.’

Seriously, does my mother not know me at all?  Have I ever been know to shy away from something simply because it was falling apart?  Do I not have a huge stash of the old black and white family photos that no one else wanted, even though we aren’t even sure who the people are in them?

Fortunately, she had literally just thrown it out, so I asked her to please go back out to the garage, dig it back out of the trash can, and save it for me.

In my mind, this scrapbook chronicles not only an amazing piece of family history but also a classic story of the great American road trip.

My mom was a surprise baby that came along a bit late in life for my grandparents.  My grandmother was 42 and my grandpa was 48 when my mom was born.  She had two older siblings but by 1953 they were married and out of the house and she was effectively an only child.

That summer my grandparents loaded up the car and the three of them headed to South Dakota to pick up my grandmother’s brother and his wife, Uncle Knute and Aunt Alma, and then the five of them headed off for adventure at 5 a.m. the next day. 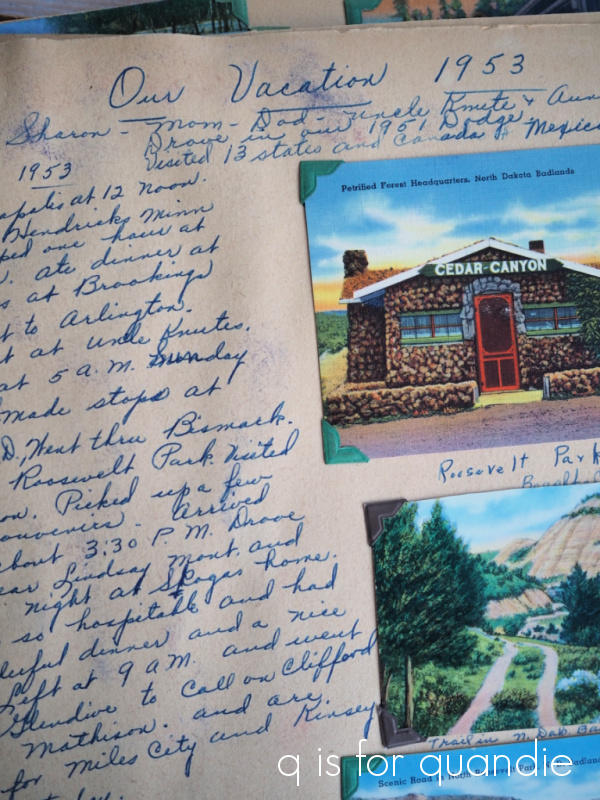 My grandmother documented the entire trip in this scrapbook starting with a map of their route.

There wasn’t an explanation for the two different routes shown, but it was noted that they followed the one shown in purple crayon.  The red crayon route must have been rejected for some reason, or perhaps it was plan B.

It seems that their goal was to not only see America, but also dip into both Canada and Mexico.  It must have been the trip of a lifetime for the adults (I can’t say the same for my mom, she went on to travel the world!).  They drove 7,000 miles and it took 22 days.  They saw snow deeper than their car in the Beartooth Mountains and temperatures of 105 degrees in the Mojave Desert.

But my mom still says that one of the things she remembers the most about this trip was having to sit in the back seat of the car in between Knute and Alma for all of those 7,000 miles.

I was surprised to learn that that between them my grandparents and my great aunt & uncle had relatives spread across the country all the way to California.  Out of 22 nights on the road, they spent 10 of them at the homes of various family members including a night at Aunt Nettie’s house in Long Beach, CA.

I also had to chuckle over my grandma’s caption for this next rather blurry photo.

Apparently several of her relatives lived in ‘modern homes’.  I suppose in 1953 that house was the height of modernity!

They seem to have hit all of the classic stops for a road trip out west including the Badlands, Yellowstone, Mount Hood, the Golden Gate Bridge in San Francisco, the Redwoods, Yosemite, Los Angeles, Tijuana, Zion, the Grand Canyon, and even Las Vegas …

I believe I may have inherited my feelings about Vegas from my grandmother with her comment that it was ‘mostly gambling places & motels’.  She doesn’t sound impressed, does she?

My mom said that Aunt Alma put $3 in a slot machine and my grandma was absolutely scandalized and called it sinful.  Hmmm.  In this case, the apple fell very far from the tree indeed.  I wonder what grandma would think of the fact that her daughter now lives near Vegas and I suspect she puts a little more than $3 into those machines.

For some reason I find it fascinating to think about how different Vegas must have looked in 1953.  Here’s a photo that I found online.

While searching around for that photo, I also learned that the U.S. government was testing atomic bombs in Nevada in 1953.  In some cases the mushrooms clouds could be seen from the strip.  And apparently it became a tourist attraction (check out this quick YouTube video if you don’t believe me).  Can you imagine?

I asked my mom about that and she didn’t remember seeing any mushroom clouds on their trip.

My grandmother kept track of the entire cost of the trip, which added up to a whopping $278.63, which I imagine was a fair amount of money in 1953.

I also thought it was interesting to note that my grandpa had to take an extra week of vacation without pay.  I assume he only got two weeks of vacation per year, and they were gone for three weeks.  I wish they’d noted how much a week’s pay was for him.  My grandpa worked in a bakery, so I don’t think that they were wealthy by any means.  According to the US Census Bureau the average family income in 1953 was around $80 per week.  So if you consider that, this trip, including the lost week of wages, cost about the equivalent of a month’s pay.

I wish I knew more about what inspired my grandparents to make this road trip.  I did a little online research and discovered that the popularity of road trips really took off in the 1950’s due to the rapid growth of ownership of automobiles by American families.  That made me wonder if the car they drove was their first family car, so I asked my mom about that.  Unfortunately she wasn’t really sure, but she does remember her dad taking the bus to work when she was younger so it is possible that they didn’t have a car prior to this time.

I also wonder if this trip is what inspired my mom’s love of travel.  She took us kids on roads trips nearly ever summer when we were young.  We drove to Florida once, and to California multiple times.  Of course, that is what inspired my own love of travel as well.  Speaking of, we just learned that the European cruise we had booked for September has been officially canceled.  This is cancellation number two, we were originally supposed to go in September 2020.  We’ve rebooked once again, now for September 2022.  Let’s hope that the third time will be the charm.  By the time it rolls around it will have been 4 years since our last trip to Europe and that just seems plain old crazy.

So tell me, do any of you have good stories to share about taking the great American road trip?  Or maybe you’ve taken road trips in other parts of the world?  I’d love to hear about your favorite places to visit, or trips taken, in the comments!