A while back my sister-in-law Tracy texted and asked if I wanted a dresser that was ‘free to a good home.’  She included a picture.  I’ll admit, I didn’t immediately love it.  It seemed uninspiring and maybe a bit too traditional for me, and it was hard to see the details on my phone.  But hey, it was free!  So I said yes. 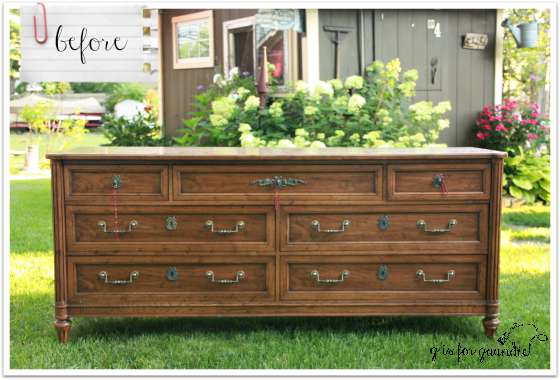 And before you think I am insulting my sister-in-law, I have to point out that she works in a senior care facility and this was a piece from her work, not from her own home.

When we got there to pick it up, she told me that I could also have the matching nightstand if I wanted it.  Sure, why not?  In for a penny, in for a pound.

I decided to start with the nightstand since it was small.  I pulled out my Fusion paint in a color called Inglenook that I hadn’t tried yet.  I lightly sanded the whole piece, and then I painted two coats of Inglenook on the outside.  I painted the interior in Fusion’s Limestone for some contrast.  That took three coats to get good solid coverage.

Once I got a closer look at the hardware on these pieces, I decided I had to keep it.  It has great detail.  I added some gold Rub ‘n Buff to spruce it up.

I put the hardware back on, and I was bedazzled.  Truly.  This was one of those amazing transformations.  I’ll admit, I did not see it coming.  The piece went from really traditional (like something that my mother would have in her house) to really pretty and very French.  I hadn’t even noticed the French-ness, but it definitely came out with the paint job.

Before I continue on to the dresser, I have to tell you about that suitcase.  I came home from work one night and there it was on my porch.  I don’t know how it got there.  I must have had a visit from the vintage suitcase fairy!  So I threw it into the photo shoot.  In hindsight, maybe it was a weird addition to the photo.  If you are my vintage suitcase fairy let me know so I can thank you properly!

I had originally been planning to paint the dresser in a pale grey, but having seen how gorgeous the Inglenook was, I had to go with that again.

Have I mentioned, by the way, that this thing is ginormous?  It is nearly 6′ wide!

There are four different types of hardware on this guy.  The drawer pull on the top middle drawer matches the nightstand and is the most detailed. 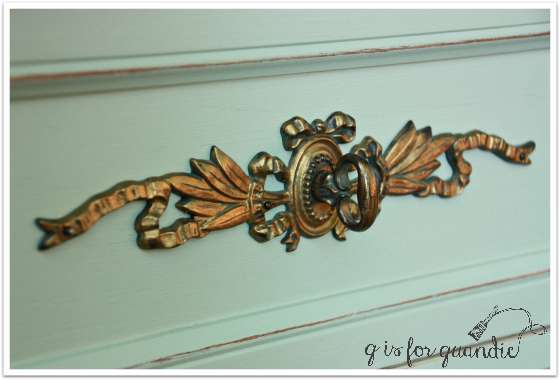 My reader Victoria calls these “mock key knobs”, which makes sense since it’s supposed to look like a key that has been inserted into a lock.  These are some pretty gorgeous mock key knobs, right?

The two smaller side drawers have a very simplified version of the mock key knob. 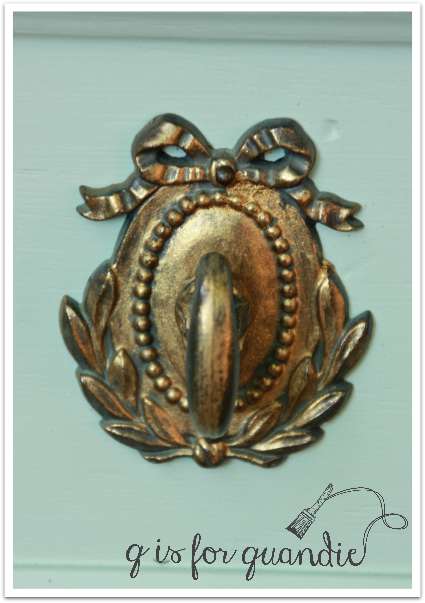 The lower drawers have regular drawer pulls rather than mock key knobs.

But they also have a faux keyhole in the middle of each drawer.  When I pulled these off I found that the original manufacturers (I assume) had put a little piece of black electrical tape behind the opening on these escutcheons to make it look like there was really a keyhole behind them.  I decided black electrical tape just did not cut it for me, so I added old book pages behind them instead. 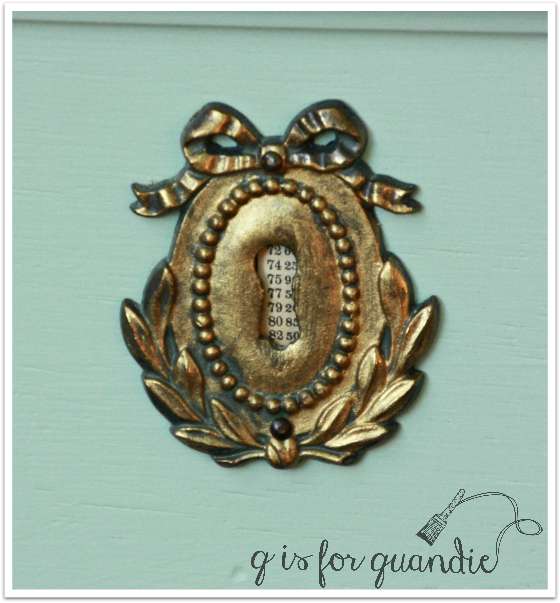 I love adding these kinds of details to my pieces.  I don’t know if anyone even notices them, but I hope they do.

If you’ve ever used Rub ‘n Buff, you probably know that you just put a little on your finger, rub it on, and once dry, buff to shine (hence the name).  After doing all of these pieces of hardware, I had one seriously gold finger … which was ironic because there was a Bond film festival on TV while I was working on these and I watched Goldfinger not just once, but twice in one day (well, OK, I did nap through some of it the 2nd time around).  Ahhh, Connery at his finest.  But seriously, how did they get a character named Pussy Galore past the censors in 1965?

Anyway, I staged both of these piece simply with some Vanilla Strawberry hydrangeas, some Rachel Ashwell books and one of my favorite vintage clocks.

Both of these pieces are available if anyone out there wants to add a little je ne se quoi to their home.  Local sales (Twin Cities area) only I’m afraid.  It could never be cost effective to ship these!    Sorry, these pieces are already sold!  As I suspected, they went really quick at these prices.

65 thoughts on “never look a gift horse in the mouth.” 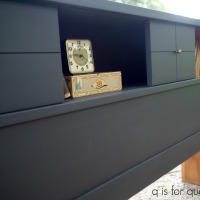 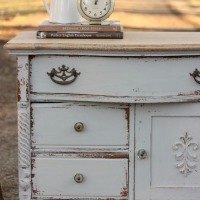